First off, shout out to everyone continuing the “Best & Worst of Cold Emails” series with us! If you’re new to this thing, we are taking a look at some of the best and worst cold emails that we’ve received from other companies – to give readers and writers a few insights on what makes cold outreach good, bad, and ugly.

November’s post is a little different because we’ve come across a special unicorn—an email that has joined the forces of bad and ugly to give you… bugly. (Not to be confused with wonderful Thanksgiving tradition of a Turducken – combining the forces of turkey, duck, and chicken).

But first, let’s start with the best…

This is my personal favorite cold email because it involved cookies! (!!!) Food themes predominate this post for some strange reason… But I digress.

Since CIENCE was recently named the #112 fastest-growing privately held companies in the U.S. (shameless plug, but it’s true) in the 2019 Inc. 5000 list, we’ve received our fair share of pseudo-personalized emails acknowledging our success. Honestly, many of them have been underwhelming, but this coordinated offline and email campaign made us all talk about the great prospect experience that Outbound Marketing can provide potential clients.

This is how it went down.

Before receiving any email, someone had a box of cookies delivered to the CIENCE headquarters.

A couple of days after the last cookie was eaten, we received this not-so-cold email…

Subject: Our VP of Marketing told me no ????

What did you ask your VP of Marketing? What am I supposed to know? Wait… do I know you?

Write a Subject Line that gets opens

What a great subject line! It definitely drives curiosity. What’s even better? The subject line precedes an explanation and visual proof of her asking and getting shut down by her VP of Marketing.

The sender points back to the cookies without being overbearing – an expert move in the world of cold emails. Sometimes, when people send gifts, they are so blatant about it being a quid pro quo for something in return. But this writer uses an informal tone, a few remarks, and a question about if the cookies tasted as good as they looked.

Then she got straight to business by quickly introducing the higher values of what her company could accomplish for CIENCE. I love how she used numbers. 15% growth and cutting your sales cycle by 33%. Numbers are not only a great way to draw attention by disrupting the norm, but also provide valuable information for those who make decisions based on numbers and stats.

In the same sentence, she gave third party validation to a client of their company who was able to actually achieve these numbers. The writer linked their name-dropped client to a helpful case study explaining how they were able to accomplish this. A very impactful sentence, if I may say so myself!

There’s one other reason why I found this email especially tasty–the SDR never mentioned the cookies in subsequent emails. They simply let us enjoy the sweets, and talk positively about the company and how they could help us (and I’ll tell ya what, reader – If we are ever in the market for this company’s services, they will be getting a meeting).

Annoyingly, we’ve also been subjected to those demanding email campaigns after a “gift” in which they rudely and crudely reference a gift (that I never received, BTW) in 8 straight emails over 3 weeks. Talk about annoying!

The CTA is simple, not forceful, and also links to a page that allows recipients to easily book a time on their own while also being shown a demo of their software. Because… who has time to reply to an email these days anyway?

The Bad of November

Okay… now let’s make the shift from The Good… to The Bad of November. These next two emails were sent two weeks apart by the same person. The first and the worst reason why these emails were labeled as “The Bad” is that even though they have different subject lines, THEY ARE THE EXACT SAME COLD EMAILS.

Not great, not terrible. A little too assertive, but nothing to write a blog about… 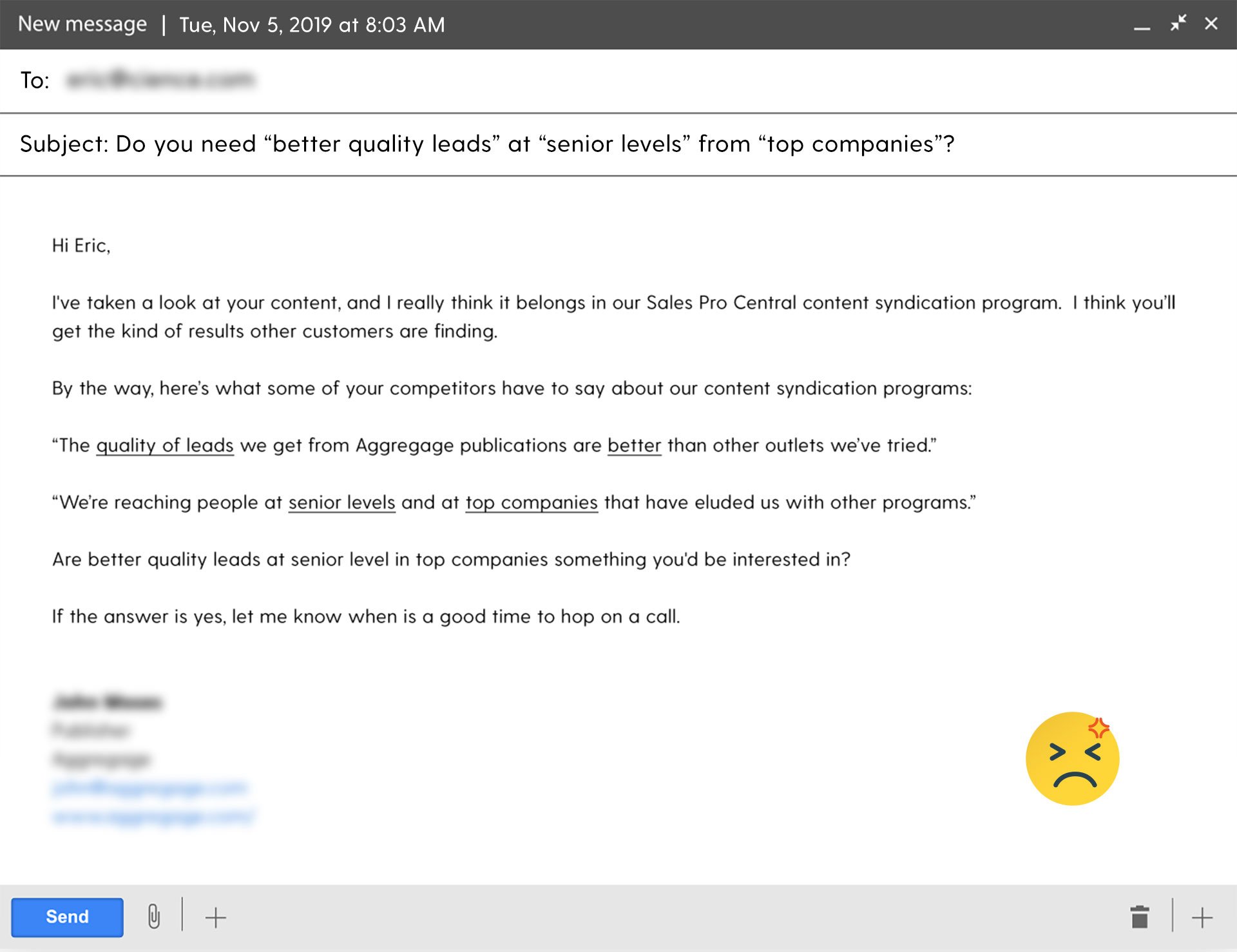 Other than the fact that they are identical, I found them to also be extremely questionable. I appreciate how the writer incorporated quotes from testimonials into their cold emails to show some third party validation. It makes me feel all warm and fuzzy inside knowing that others have used their services and are satisfied with them.

BUT WAIT! Let’s look at these quotes one more time. Who even left these quotes? Usually, when testimonials are used, we know WHO they came from. Without mentioning a name or the name of a company, the quotes look like they were created by the person writing the cold email!

How am I supposed to trust that he is a good person to do business with if I can’t even trust if these quotes came from real people? Smh

This email (and it’s brief follow-up) landed in The Ugly section because the language is just plain ugly. I’m pretty sure the writer is not a native speaker due to the large number of grammatical mistakes and errors. A word of advice: when sending emails to an American company (especially one that specializes in cold emailing), PLEASE make sure there are no grammar issues!

English is an extremely difficult language to learn, so I give her kudos for trying. But even before opening the email, we already know we are in for a disaster. So let’s start at the subject line: Marketing Automation Tolls & Software Users. Tolls? TOLLS?! Smh.

After opening the email, I quickly see that this is a mass-produced message. There is absolutely no personalization. Recently, Backlinko analyzed more than 12 million outreach emails, and they found that emails with personalized messaging have a 32.7% better response rate than those without any personalization at all. So take a little time and make the person you’re reaching out to feel like you care— even just a little.

Aside from the spelling and grammar issues, we also have capitalization issues and punctuation issues throughout the messaging.
The second follow-up email is no better. I especially like how she closes the email with ‘Thanking you.’ No. I’m thanking you, writer of these two cold emails, for allowing me to write a blog to point out the importance of a quick spell check and grammar check before sending out mass emails.

The Bugly Cold Emails of November

Now that we’ve seen a Bad email and an Ugly email, let’s look at the winner for the Most Bugly email of November. I’d like to think of a Bugly cold email like that friend who brings gravy-flavored ice cream. Sure, gravy is great on turkey, stuffing, and veggies. And ice cream is great with pie. But mixing those two together is a combination abomination of unspeakable tastebud horror.

That Bugly taste is the same feelings that these 4 emails gave us.

Before going into this one, I must warn you that this is something unlike any that we’ve ever seen. 4 email waves were sent (and received) over the course of almost 2 years!

If I’m the recipient of this email, I’m a little offended that Matt thinks he fills seats at my events. Here’s a small hint for Cold Emailers of any level: Let your prospect be the hero and wear the cape.

2 years after the initial email was sent, the sender emailed the second, third, and fourth in weird spurts. The second email was received nearly 2 years to the day after the first, and the third email (strangely) sent two days after the second. And to complete the random cycle, the fourth email was sent almost (but not quite) two weeks after the third. Kind of confusing, right?

What makes these emails even more strange is that, like The Bad email, these emails ARE THE SAME (Have you noticed that we’re not fans of re-using identical emails?). Take a look for yourself…

If nothing else, the prospecting message is remarkably consistent. The only that that’s changed in two years is the example of client companies. The email in itself isn’t terrible, but there’s no personalization (so it doesn’t answer “why me”), and it doesn’t tell us why he’s emailing now – whether two years ago or 2019. My guess is that there’s no reason as to why CIENCE was emailed, as you can see by using the equivalent of a carbon copy.

Making a Cold Email into a Bugly Winner

Okay, okay, I get it – your startup has amazing customers. You get people sitting down in seats at marketing events. And Matt, I’m to understand that you fill these rooms for me with “perfect prospects.” If I’m the recipient of this email, I’m a little offended that Matt thinks he fills seats at my events. Here’s a small hint for Cold Emailers of any level: Let your prospect be the hero and wear the cape.

And if the first “Hope you’re well” didn’t feel disingenuous enough, the same email 2 days later makes it all the more clear that the sender of the email doesn’t really care who Eric is, or what CIENCE does.

Maybe the sender was thinking of cold emails like billboards… seeing the same email in inboxes is maybe like driving past the same billboard. Except this isn’t a billboard, and people like to have their private spaces disrupted only when there’s something that will speak directly to and help them.

Carbon copy emails (especially when they’re self-congratulatory) simply do not check those boxes, and you’ll be left wondering why you’ve been blocked.

Of course, this calls to mind one of the funniest scenes in ‘Something About Mary’ and the twist on 8 minute abs… This comedy never gets old:

Then again, as Harland Williams reminds us, shaving a minute off is just a great business idea (It’s Brie time, baby!).

Super secret pro-tip: Break some grammar rules and use digits for small numbers. There are countless studies that show online readers scan texts, and using numerals helps your CTA stand out and convert!

With replicas of the same email being sent out, I’m surprised they didn’t go directly to the spam folder. I’m sure the writer didn’t mean to sound ingenuine, pushy, or rude; but when you send the same messages out over and over again, that’s what the reader thinks. At least take a few minutes to include another sentence or two. Mix it up a little! Check LinkedIn. Visit the company website. Anything!

After receiving these emails, I’d think the company sending them actually enjoys wasting my time.

Reaching out via cold email is hard, but when you learn from mistakes that others have made, you’ll start seeing better-improved response rates, and more meetings on your calendars. I hope you’ve gained valuable insights as you continue your cold emailing journey. Let’s eat!

What is the main purpose of a cold email? To generate leads? To raise awareness about the company?...
Read the article
Read full post: Outbound Emailing in Times of Uncertainty – The Best and Worst of April 2020
Email Campaigns

The Good, Bad and Ugly Cold Emails of December