Lead generation is an essential activity for a company that intends to grow. This is why CEOs should always mindfully monitor it, and make sure that it’s up to date. Many articles exist with regards to this subject, but few of them are based on real market research. We have a helpful update from The Bridge Group. The company recently issued its Sales Development Metrics and Compensation Research Report 2018. The Bridge Group did an excellent job collecting and processing valuable statistics, which will help set the benchmarks for sales and marketing teams in the upcoming year. We believe this study is a must-read for CEOs as well as anyone whom works with lead generation. SDR Metrics & Compensation Report provides much data to analyze. The Bridge Group surveyed 434 B2B C-level titles from companies with $24M median annual revenues. Most of their respondents work in SaaS (52%), Services (16%) and Software (9%). We studied the report, and analyzed the main trends in sales development. Based on it, we picked four main takeaways for CEOs whom want to succeed in 2018 and increase the revenue growth of their companies.

The main trends in sales development

One of the strongest points of Sales Development Metrics and Compensation Research Report 2018 is the opportunity to track particular stats throughout time. Some of them are provided in temporal graphs. You can also compare other metrics with the previous years’ reports. This way one can understand the trends and make some predictions for the upcoming years.

After a significant decrease in average tenure and required experience, they’re rising again. However, the increase isn’t significant: from 1.4 years to 1.5 and from 1.3 to 1.4, respectively. We’re yet to see if the growing trend will remain or change instead. 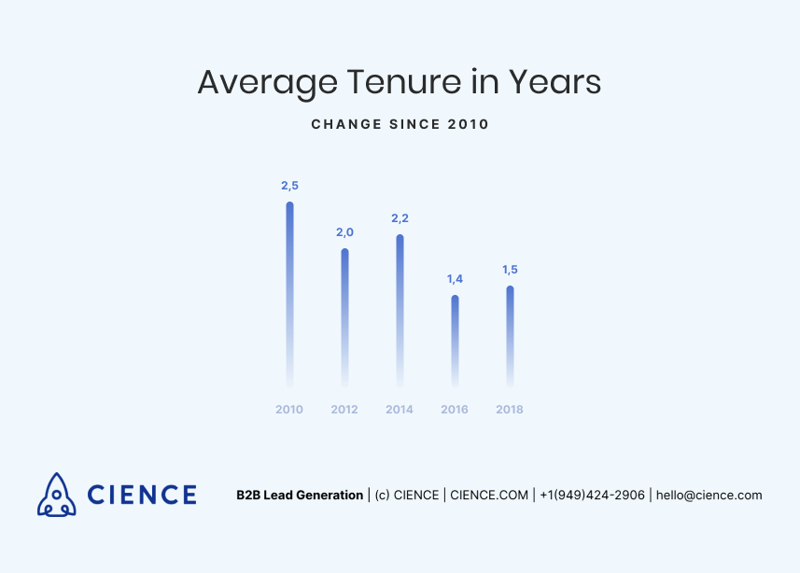 We’ve seen this situation back in 2012-2016, at least for the tenure. After a short rise, it dropped down again significantly. Here’s a couple of thoughts on it. Both average tenure and required experience are unlikely to decrease because they’ve hit rock bottom. Hence, the average ramp time is 3.2 months, the average full productivity of an SDR lasts no longer than 1.2 years, which is an extremely short path to promotion. Obviously, the companies won’t shorten this period because it will affect their ROI. However, they won’t probably be able to extend it because of the high demand for sales reps on the market (read more about it below). 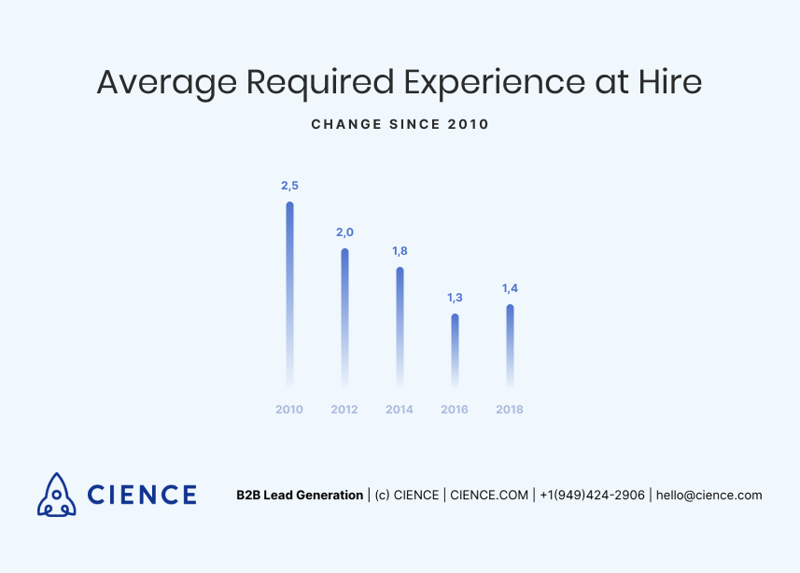 Unsurprisingly, after a 2-year flat, average OTEs are on the rise again. The demand growth makes SDRs more valuable. However, there are other factors that contribute to this situation.

As the average selling price goes up from less than $5,000 to over $100,000, the OTE increases by 17%, and there are several reasons for this. First, the expensive products are harder to sell. They’re complex and require multiple back and forth communications as well as better SDR’s skills and experience. 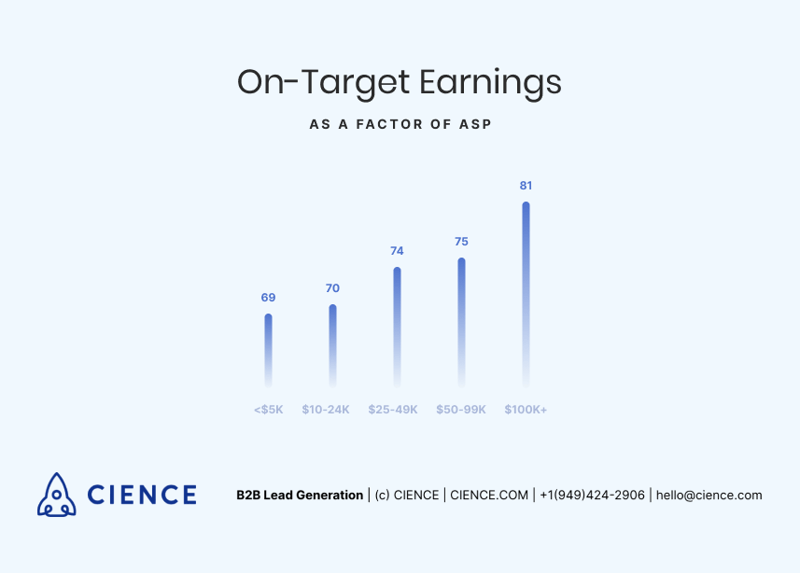 Second, the selling cycle for such products is longer. As a result, the tenure will be longer too. Money is one of the fundamental methods to incentivize experienced sales reps to stay longer in this position rather than to promote to AEs. 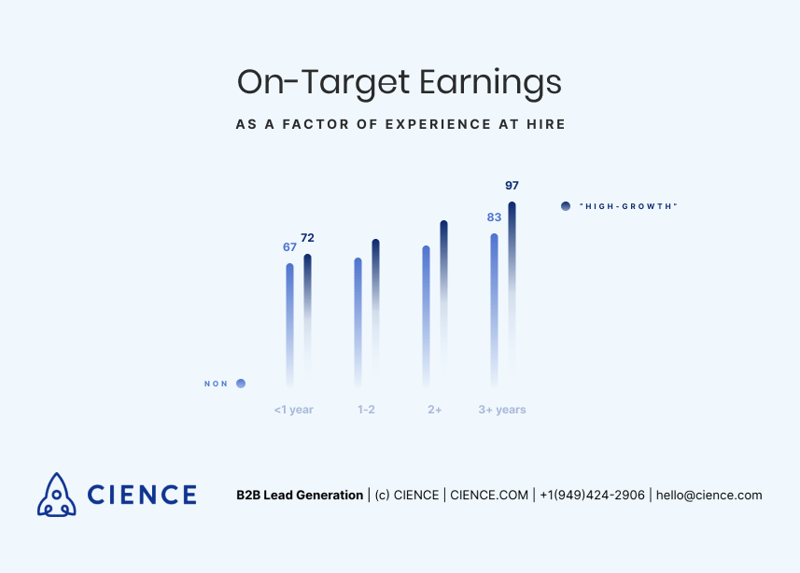 The critical question is whether the OTE growth trend will retain. On the one hand, the increased demand for SDRs will probably stay at the same level, unless the average tenure rises, which is unlikely. On the other hand, the possibility of outsourcing sales development and cutting the expenditures significantly might cause the OTEs decline again.

These statistics are pretty impressive and valuable. Obviously, the number of operations, the quota and attainment may vary depending on industry, company, ASP and other features. However, the average stats will help you understand how to set the KPIs and quotas for your reps and what to expect. The first thing you need to know is that it is harder to reach a prospect. An SDR makes 9.1 attempts on average. 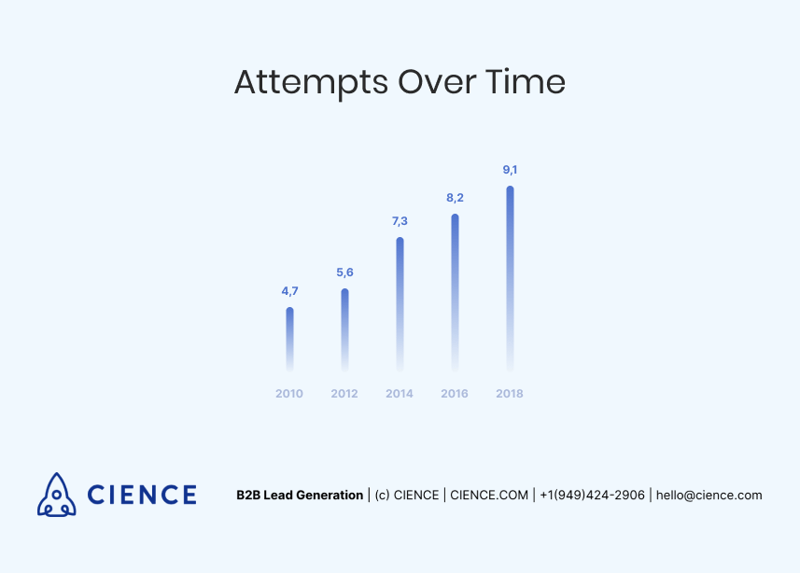 On the other hand, the number of dials per day decreased. As a result, the volume of quality conversations declined.

Despite the drop down in phone calls, the quota remained the same for introductory meetings and slightly grew for qualified leads. In addition to that, the conversion rate for the former remained the same, while it decreased for the latter.

With the above said, one might think that the efficiency of SDR work has dropped down. However, in fact, the quota attainment stats have improved from 65% in 2016 to 65% in 2018. 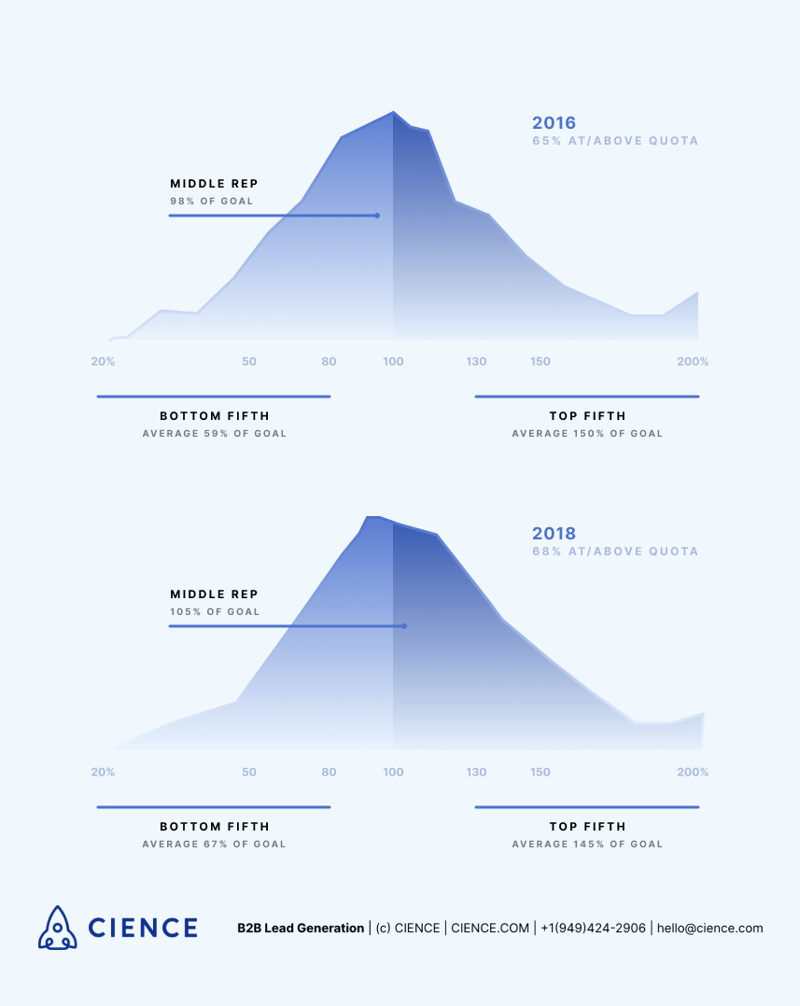 The possible explanation for overall better quota attainment is the usage of other communication channels, such as emails and LinkedIn. As one will see below, LinkedIn Premium Sales Navigator has entered the late majority stage of the Technology adoption life cycle.

Does an SDR use software automation to facilitate their work? They should be if one wants better results. The Bridge Group provided a helpful infographic that shows the technologies (apart from CRM) one needs to adapt to improve the work of their sales reps team. 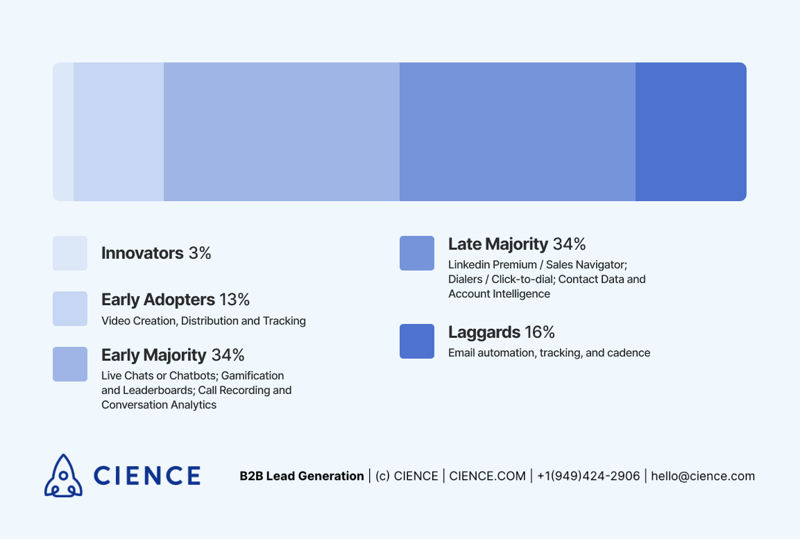 What are the main takeaways for CEOs?

1. The difficulty to get through to a prospect shouldn’t be an excuse for not attaining quotas.

As we said above, SDRs are making fewer phone calls per day than in 2016, but more of them manage to achieve their quota, which literally means that a CEO can expect its 2/3 of their outbound team to succeed in prospecting. On the flipside, lead generation is a multi-stage process. Problems might occur at any phase preceding the work of SDRs. This is why we suggest making a comprehensive audit of all the activities in your pipeline to understand the real source of poor quota attainment. We wrote a detailed post on the challenges that might occur in lead generation, and how to tackle them.

2. Outbound is as powerful as ever

In addition to greater quota attainment, we can see that on average, an SDR generates a $2.7-million pipeline.

Furthermore, according to The Bridge Group Report, only 6% of 434 companies have solely inbound teams. Indeed, this is a very small percentage as opposed to companies with only outbound reps. 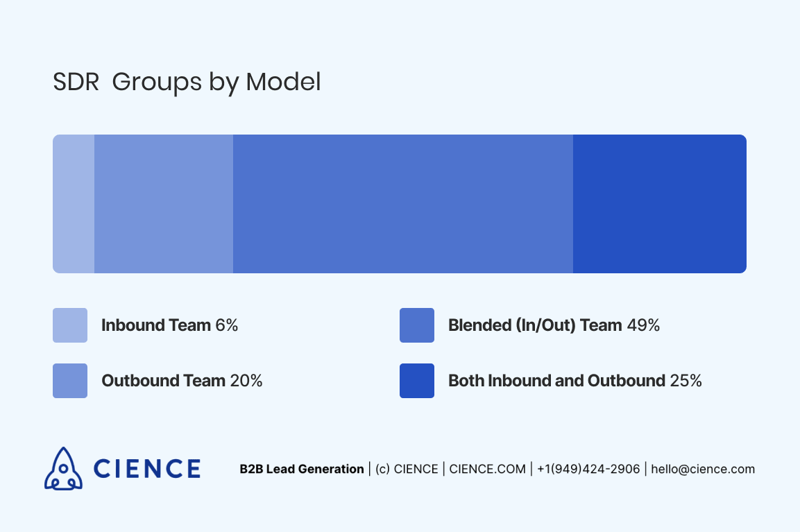 Unfortunately, The Bridge Group’s report of 2016 doesn’t provide similar data. However, we can use an equivalent survey of that year. OpenView’s Benchmarks for Sales 2016 Expansion Report studied 88 B2B companies. They found that 30% of transactional and 18% of enterprise companies don’t have SDRs, but only 10% and 5% aren’t planning to hire one in the upcoming year. 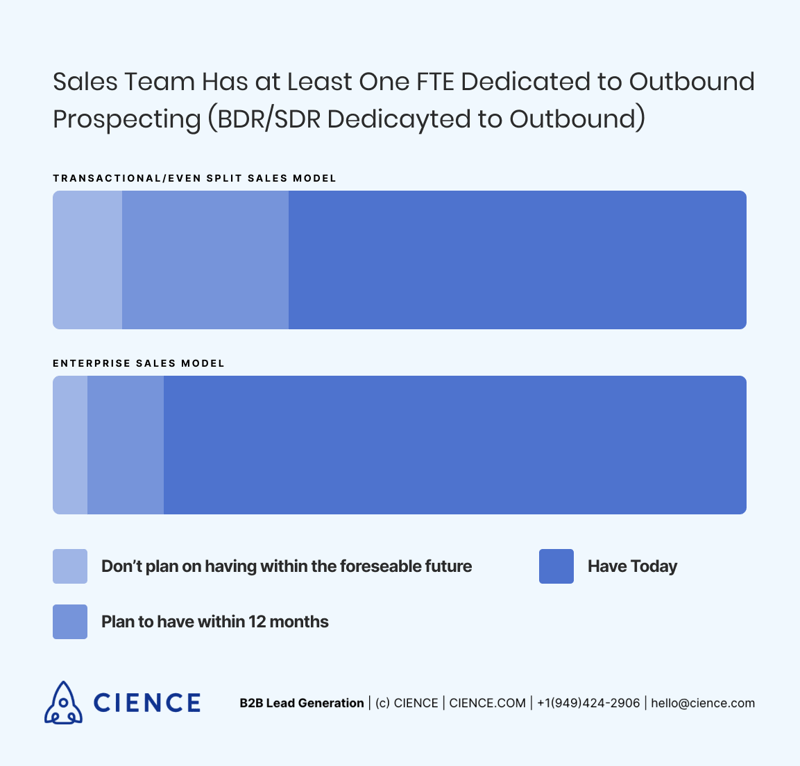 As of today, few companies still don’t have an employee dedicated to outbound activities. As sales development supporters, we believe, there are few reasons why prospecting doesn’t fit your company. The main is the business model. Our CMO Eric Quanstrom outlined it in his post on HubSpot.

3. It becomes increasingly difficult to get experienced SDRs and retain them

Most SDRs who start the career now are seeing it as a launchpad for prompt promotion. They aren’t eager to stay in this position for a long time. Let’s be frank here. Being a lead generation outsourcing company, CIENCE has about 60 sales reps, and 20 Sales Assistants employed. We see their hard work every day, and we can witness their struggle with rejection, quota attainment, and phone calls to people they barely know. It’s extremely hard to start conversations, deliver value, and try to stay positive and professional daily. There’s too much uncertainty in this job, and few people can really cope with it in the long run. At some point, the work with qualified leads is less stressful because there are fewer contacts and rejections. The average required experience at hire being 1.4 years along with the short tenure and 39% attrition (excludes promotion and internal transfers) is an indirect indicator of high demand for SDRs on the market. In fact,

41% of companies are ready to hire a person with less than 1-year experience.

Apparently, some of them recruit people with no experience at all. As a result, companies with smaller revenues struggle to survive the battle over a longer tenure before promotion. They try to retain people in outbound sourcing by introducing positions, such as Team Leads and Senior SDRs. Furthermore, they need to compete on the market with companies that can offer higher OTEs. However, organizations with significant revenues have a similar problem. 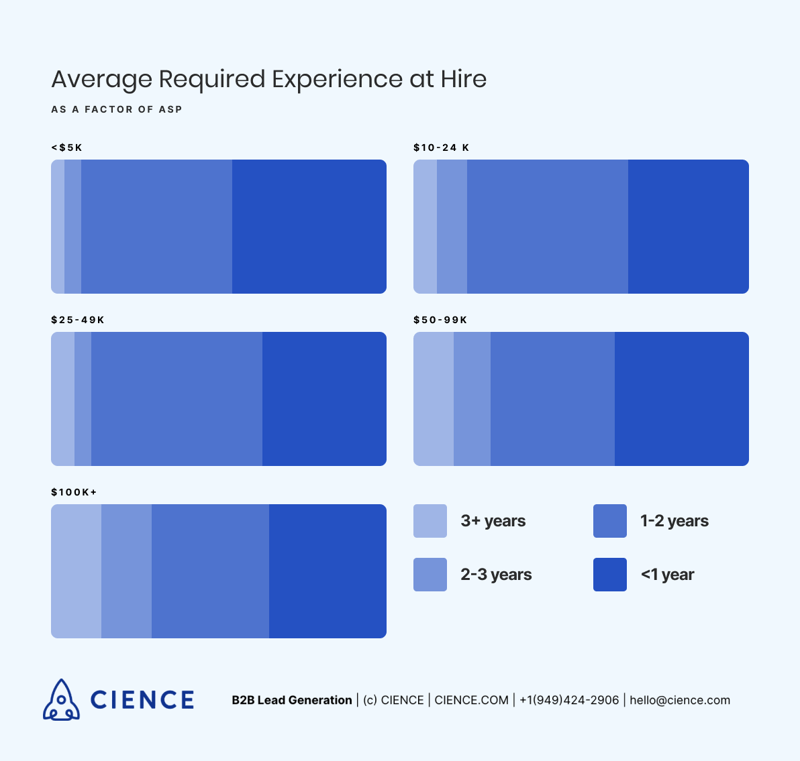 We’ve seen the average experience required at hire steadily declining over the past eight years, and it’s been less than 24 months for the past four years. The tenure has been falling too. This means that the pool of experienced SDRs is dying. As a result, there’s a great competition for them between the companies with a high average price because they need sales reps whom have been in this position for over three years.

4. Outsourcing lead generation makes sense for companies with any revenue

The rise of OTEs coupled with short tenures, high attrition rate, and the competition for SDRs make sales outsourcing increasingly enticing regarding ROI. We calculated the annual expenditures on an SDR at a whopping $123,429. 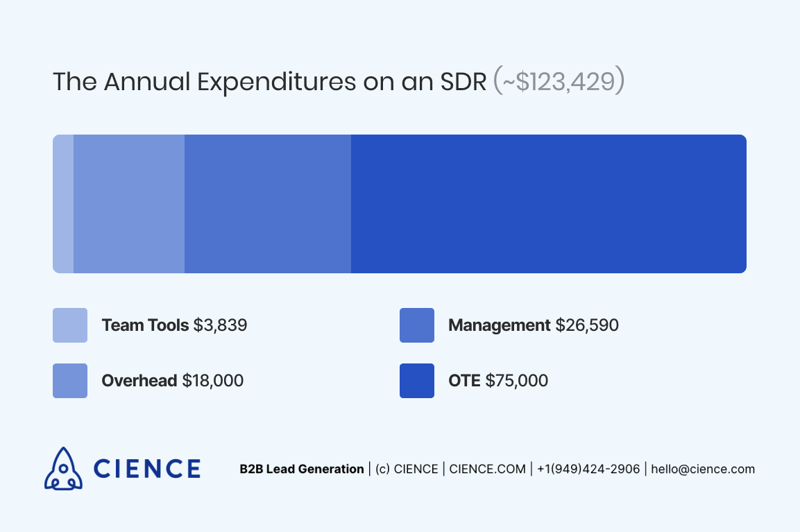 It’s roughly $10,285 per month. Meanwhile, the price for sales outsource doesn’t surpass $5,000 per 3 months. Apart from a significant ROI increase, the managers get rid of about 25% of their workload to spend it on more important things. Learn more about the benefits of sales outsourcing, and how to get started in our Outbound Managed Services Buying Guide.

We hope that this article was helpful to you. If you read The Bridge Group Report, and have your own conclusions, please share with us your takeaways for CEOs. Together we can bring more value to the business.

Sales have changed dramatically over the past decade and some people now tend to belittle the...
Read the article
Read full post: Laurie Page: “Calling Should Ultimately Be Part of Your Touch Cadence”
Sales Development, Expert Insights

Laurie Page: “Calling Should Ultimately Be Part of Your Touch Cadence”

The year 2020 will forever be remembered for one thing in particular—the COVID-19 pandemic. It has...
Read the article
Book sales meeting
Thanks for your submission.

Let's start
Help Us Create Content
You Want
Not this time, thanks