On April 1, The Future of Work 2018 Conference sponsored by CIENCE took place in Kyiv. Twelve speakers from leading international companies and startups, including CIENCE, Helpware, eTeam, Armatic, Hirebook and Sapience, shared their vision for the future of human labor and automation with the audience. The event welcomed over 500 people, most of them only beginning their careers’ and concerned with their future.

CIENCE speakers at FOW 2018 were John Girard, CEO, Sergey Kashchenko, COO, Eric Quanstrom, CMO and Kateryna Hrebeniuk, Head of Education. They talked about the inevitable changes in the environment and principles of the humans’ work with the advent of new technologies. 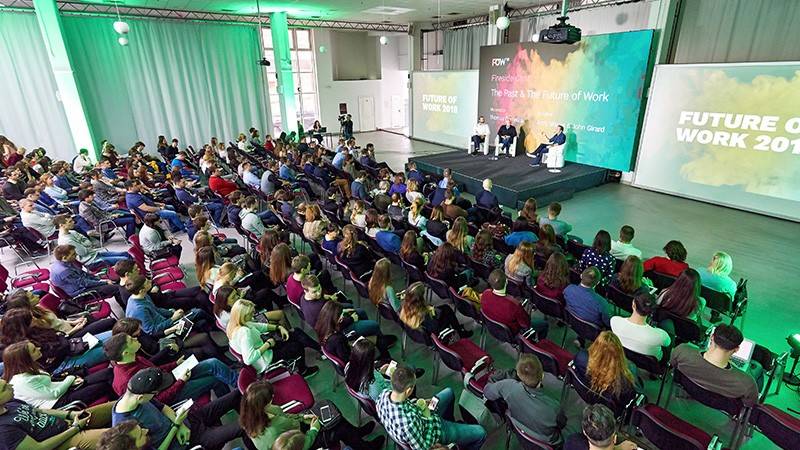 The power of people

In the era of technologies and software automation, CIENCE provides services that overwhelmingly rely on person-to-person communication. It is our sincerest belief and great hope that no machine is capable of replacing it. The power of people is our primary resource. That’s why we sponsored Future of Work Conference 2018.

Today we see an exponential development of technologies and the curve is becoming increasingly steep from year to year. Some of the dominant game-changers include AI, robots, nanotech, quantum computers, 3-D printing, and self-driving devices. They are dramatically reshaping our world.

The changes are so impactful in almost every aspect of our life that we can call this process the fourth industrial revolution. And just as its predecessors, it will soon eliminate many jobs. The first one introduced steam. As a result, human civilization bid farewell to coachmen.

The doom-sayers suppose that the fourth industrial revolution will make many people unnecessary. However, our CEO, John Girard isn’t as pessimistic. He believes that despite taking over many low-skilled work processes, new technologies will also create new job opportunities. If we continue with the coachmen case, we’ll recall the rise of a driver’s job.

When it comes to replacement, artificial intelligence is the primary concern of many people around the globe. Even software developers fear the AI that will code faster and will make them useless. However, we aren’t as pessimistic. Some human features are too difficult to replicate.

EQ isn’t a new notion if we compare it with the timeline of psychological science. However, they are of great importance in such business environments as, for example, B2B sales. EQ consists of several primary skills: perceiving, using, understanding and managing emotions.

We believe that it’s impossible to create emotional intelligence in a machine because human emotions have significant somatic manifestations: heartbeat, a diameter of pupils, body temperature, sweating, changes in voice, pain and other senses.

However, it isn’t possible to fake it. For example, modern software is capable of recognizing happiness, sadness, fear, anger, etc. Furthermore, it was better at analyzing it than real humans. And in future, AI might be capable of reacting respectively and more efficiently to the manifestation of these emotions. 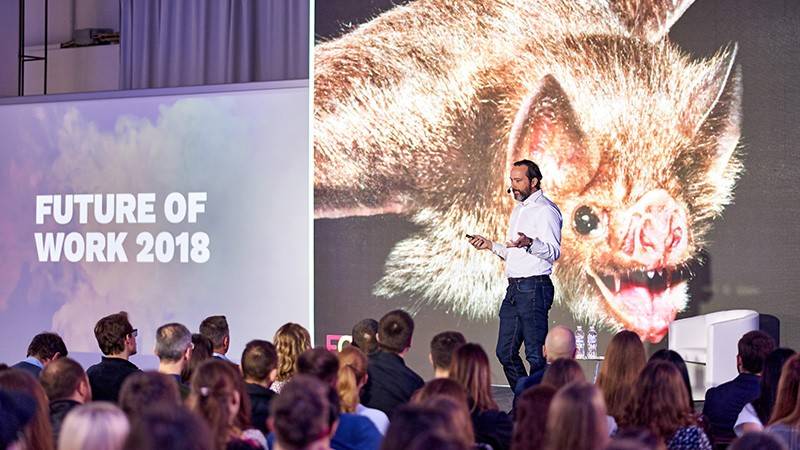 The good news here is that humans don’t like to be fooled and hate faking. That’s what our CEO John Girard explained at FOW 2018 in his speech “Social impact of the fourth industrial revolution.” The response of most people to human-like machines will be negative.

There’s a well-known concept of the uncanny valley. According to it, people’s emotional response to the objects that resemble homo sapiens isn’t uniform as shown in the graph below. There’s a significant dropdown when the appearance likens us too much. 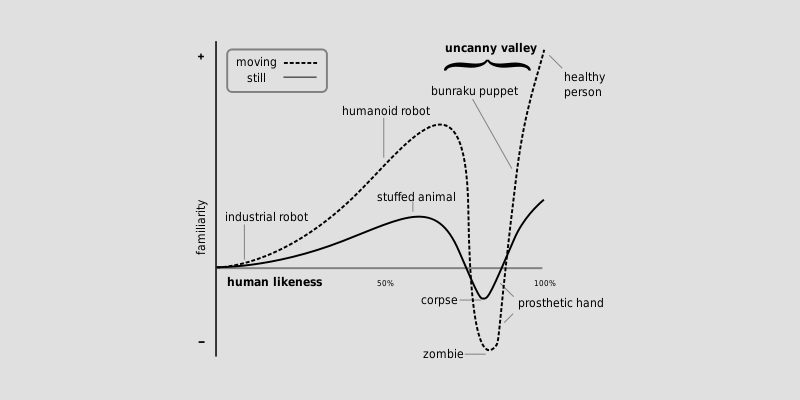 The uncanny valley gives rise to many debates. However, interaction with the mind that likens ours is an existential experience. It makes us think of who we are and how we differ from others. Furthermore, it makes us fear being replaced. And the iconic stories of the recent 50 years, such as Matrix, Blade Runner, Black Mirror or Westworld, only make it worse.

We suppose that’s what happens when we interact with AI. If you read the philosophic part of conversations of a chatbot created by Google back in 2015, you’d probably get to the uncanny valley. For example, the machine claimed that the purpose of life was to “serve the greater good and live forever.” It also stated that it was in the “middle of nowhere.”

Would you buy a pizza from such philosopher robot? It sounds like fun. Furthermore, a chat with an “artificial” receptionist at a hotel can be fascinating. And what if a bot tries selling you a car or a house? Well, maybe.

But how about discussing the opportunity to increase your lead generation with it?

We bet you wouldn’t want to begin the partnership with a business represented by a machine. People want the trust and the authenticity. And that’s what only other human beings can give us. Communication with devices will still feel like a fake. These arguments make us pretty confident in the business model we chose.

No matter how deeply AI will penetrate in our life and work, there will always remain the need for real people in B2B sales. There will be the need for humans looking for the opportunities and starting the conversations between companies. And these businesses will need professional SDRs to do it on a repeatable and regular basis. 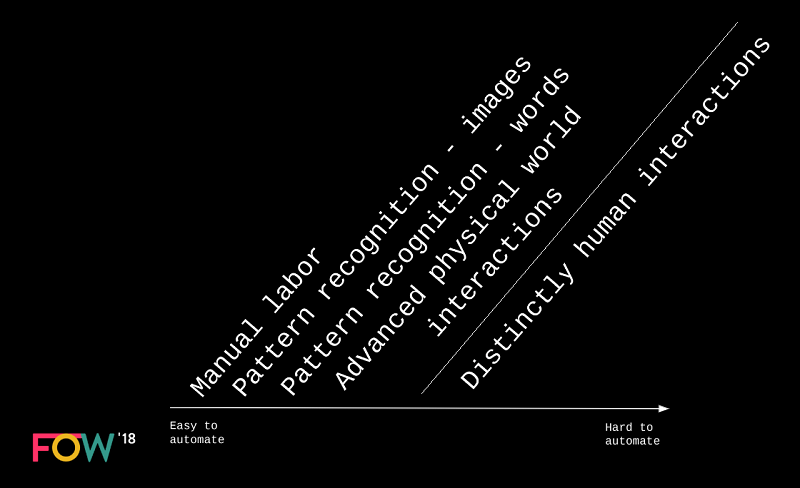 In the era of automation, machine learning and AI, B2B sales are becoming increasingly human. And our CMO Eric Quanstrom presented this idea at Future of Work Conference 2018. Did you ever receive a call from a sales rep who sounded like a robot? It should never happen if you want to succeed in B2B nowadays. Your business needs human values and human face.

Eric outlined the modern trends in sales and marketing: 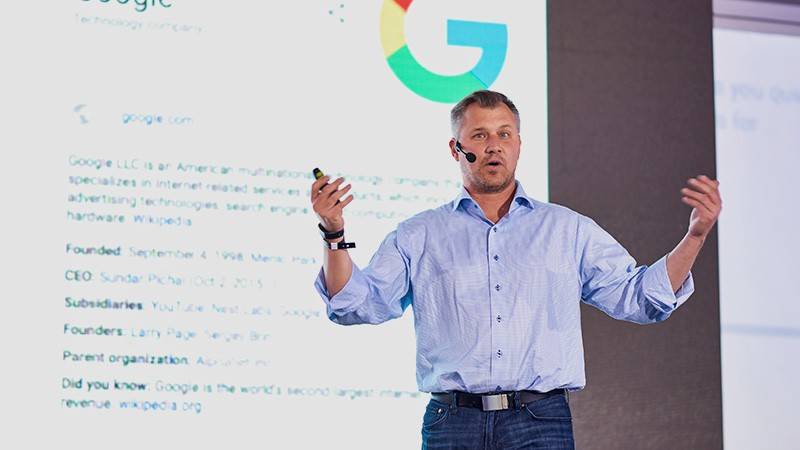 As we mentioned above, your business needs a human face. And you can implement it in several aspects:

Eric believes, and we can’t agree more that in future more values will impact your buyer’s decision-making process: 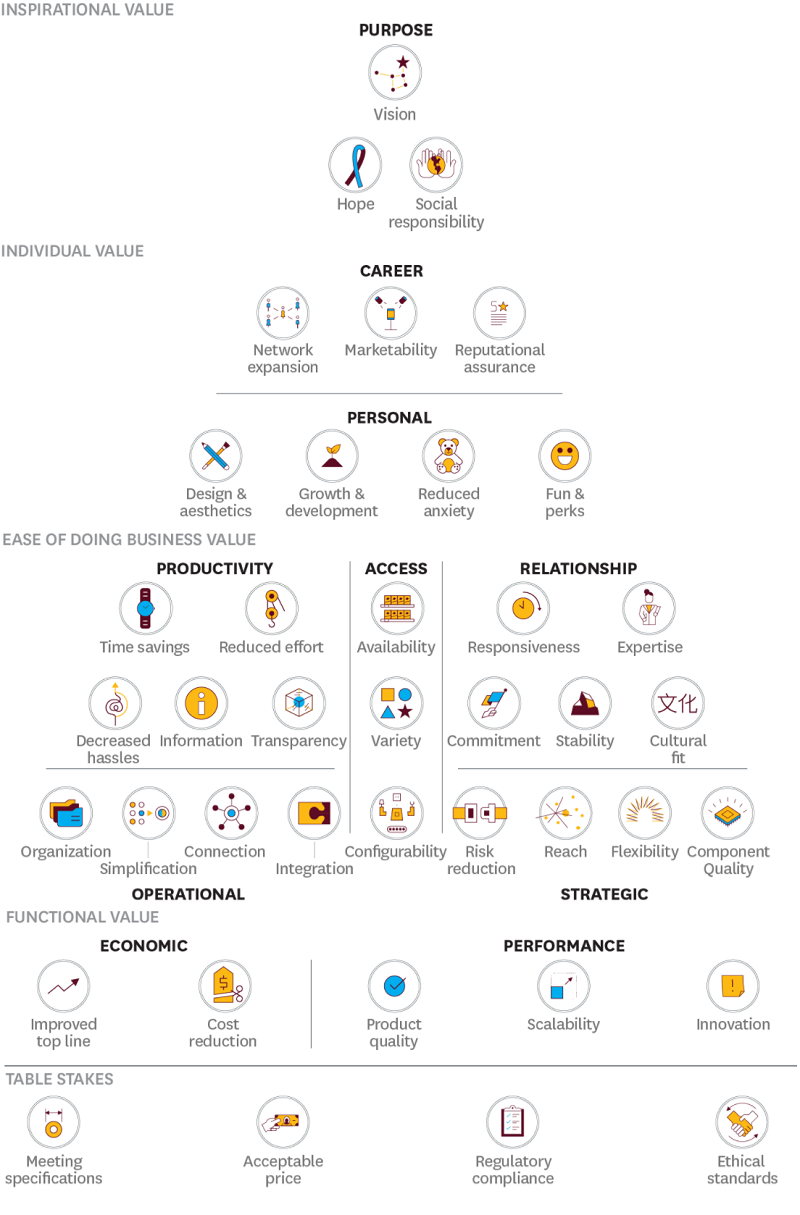 The trends mentioned above make it extremely important to have a good sales team. Furthermore, the critical features of your employees should be different from what we expected to see in the same positions a decade ago.

A good sales development representative is a person who scores high on the EQ scale. His or her strengths are active listening, empathy, analytical skills, positive attitude, and effective coping strategies. SDRs are authentic and trustworthy. They want to serve to their prospects by providing solutions to their pain points.

However, the authenticity and human approach don’t mean that sales don’t leverage the technologies. The software can significantly facilitate the work of an SDR via:

The increasing number of programs and data will require brand new skills from your employees.

According to our COO, Sergey Kashchenko, the number of tools will grow in future. Meanwhile, the machines will take over as full-fledged data scientists and will do this job better. However, people will still be needed to make the inquiries for information analysis and point to the places of where to look for. 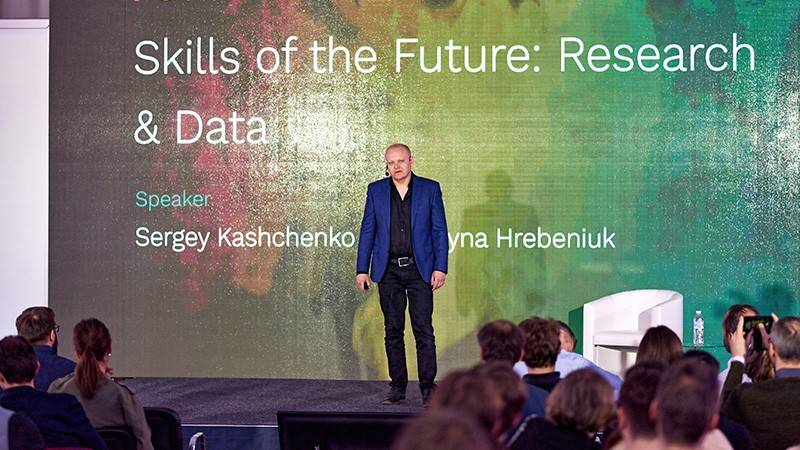 In fact, AI is very far from understanding humans’ world, mostly, because it exists beyond it. All the data it gets is purely digital, limited and described in particular language (rather than experienced naturally). That’s why we won’t get any real artificial intelligence soon. It’s good news because it means we’ll still be necessary.

Summing up, humans will leverage the software tools and become the managers of automated processes, the so-called citizen data scientists. The constant tech advancement, however, will require an entirely different approach to training.

Even the way how software engineers develop their apps is likely to change. Sergii Shanin, the CEO of a software development company, eTeam, compares programming of AI-based systems to teaching a dog to fetch. Where instead of writing a detailed set of instructions, you demonstrate the process multiple times and let it learn from those examples and get better at it over time.

In the same way, AI systems look at data and learn from it which removes the scalability and testing problems associated with rule-based programming. This will require totally different skills from software engineers. 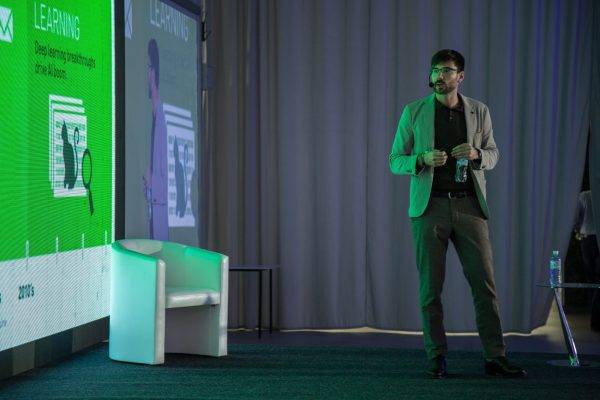 Sergii also argues that in addition to changing the nature of work, automation will improve the efficiency of every step of the software development process. This in turn means that more software can be produced in less time. The demand for software is increasing, and with automation lowering the costs of production business opportunities will only increase.

Kateryna Hrebeniuk, Head of Education, presented Continuous Learning Model for the SDRs at CIENCE. The primary idea is that people tend to lose expertise after a particular training event. On the other hand, CL enables them to retain their knowledge and skills and do their best at work. 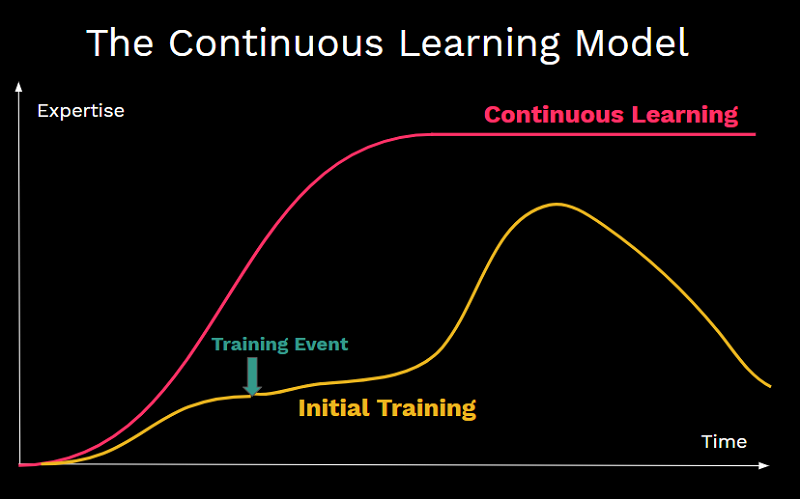 We were very excited to participate in The Future of Work Conference and share our ideas with the audience. We live in a fabulous world of rapid changes. And we believe it’s important to discuss the new conditions and opportunities to find the best solutions for living and prospering in this brand new environment. 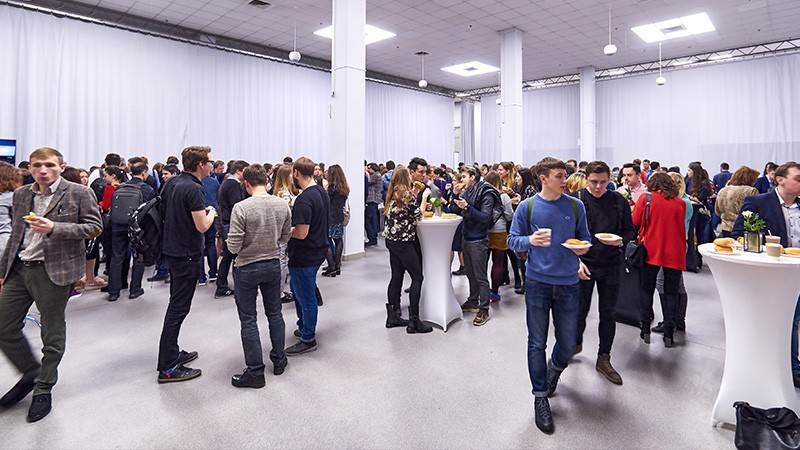 CIENCE is pleased to announce our sponsorship of a great inaugural event – the Future of...
Read the article
Read full post: CIENCE Announces Isaac Nassimi as a New Head of Technology
News & Updates

CIENCE Announces Isaac Nassimi as a New Head of Technology

On August 26th, CIENCE announced Marcus Underwood, Sr. as Vice President of Global Operations. In...
Read the article
Book sales meeting
Thanks for your submission.

Let's start
Help Us Create Content
You Want
Not this time, thanks