Every hero of every tale has a mentor who comes to them in challenging moments. Fairy godmother, pet friend, sensei, teacher, or authority figure of any other kind seems to know the magic words of encouragement or humor to lift the spirits of the hero, inspire them to do great, or motivate them to keep moving.

Unfortunately, having the perfect mentor is not always a luxury in this business But don’t worry! We’ve got you covered.

Rejections, no-appointment days, and high stakes can make sales a tough environment from time to time. So we’ve gathered the best motivational and funny sales quotes that will upgrade your business approach, list your spirits, and inspire you to be your best salesperson. 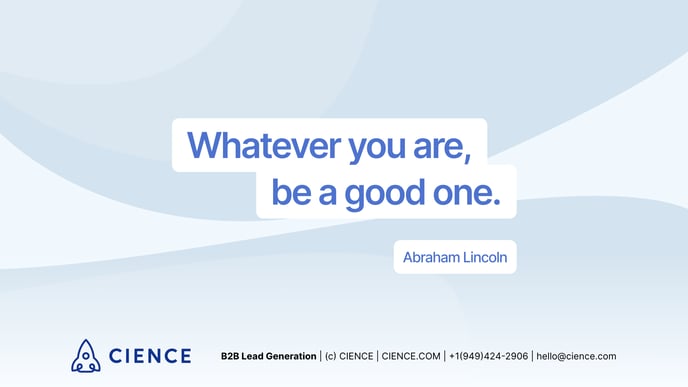 Motivational Sales Quotes to Raise You Up

This list includes more than three dozen quotes by some of our greatest figures: salesmen, athletes, authors, CEOs, activists, politicians, and artists. They know a thing or two about success and the challenges on the road to it, so let’s learn some wisdom from them.

1. “Learn from the mistakes of others. You can't live long enough to make them yourself.”

Who said that? Eleanor Roosevelt, the former first lady of the United States, diplomat, and activist.

2.“The way to get started is to quit talking and begin doing.”

Who said that? Walt Disney, a pioneer of the American animation industry.

3. “Always do your best. What you plant now, you will harvest later.”

Who said that? Og Mandino, the author of the bestselling book The Greatest Salesman in the World.

This book is among the twenty-five best sales books CIENCE recommends to read.

Who said that? Maya Angelou, a poet, memoirist, and civil rights activist.

5. “Great salespeople are relationship builders who provide value and help their customers win.”

Who said that? Jeffrey Gitomer, the author of the bestselling book The Little Red Book of Selling.

6. “Success isn’t about how much money you make; it’s about the difference you make in people’s lives.”

Who said that? Michelle Obama, an attorney, author, and the former first lady of the United States.

7. “Don’t try to do everything by yourself, but try to connect with people and resources. Having that discipline and perseverance is really important.”

Who said that? Chieu Cao, the founder and CEO at Mintago, and co-founder of Perkbox.

Who said that? Oprah Winfrey, a talk show host, actress, author, and philanthropist.

Who said that? Dharmesh Shah, the co-founder and CTO of HubSpot.

10. “Winning is great, sure, but the secret is learning how to lose. If you can pick up after a crushing defeat and go on to win again, you are going to be a champion someday.”

Who said that? Wilma Rudolph, a sprinter, a world-record-holding Olympic champion, and an international sports icon.

11. “Don't settle for average. Bring your best to the moment. Then, whether it fails or succeeds, at least you know you gave all you had. We need to live the best that's in us.”

Who said that? Angela Bassett, an actress, director, producer, and activist.

12. “I have never worked a day in my life without selling. If I believe in something, I sell it, and I sell it hard.”

Who said that? Estée Lauder, a businesswoman, and co-founder of the eponymous cosmetics company.

13. “It’s no longer about interrupting, pitching, and closing. It is about listening, diagnosing, and prescribing.”

Who said that? Mark Roberge, a professor at the Harvard Business School and author of the best-selling book The Sales Acceleration Formula.

14. “You are never too old to set another goal or to dream a new dream.”

Who said that? C.S. Lewis, an author most famous for the Chronicles of the Narnia books.

15. “Sellers who listen to buyers carefully and then give them the missing ingredients—those are the ones who stand out.”

Who said that? Deb Calvert, an author and the president of the People First Productivity Solutions.

16. “Before LinkedIn and other social networks in the sales world, ABC stood for Always Be Closing. Now it means Always Be Connecting.”

Who said that? Jill Rowley, a speaker and adviser on social selling and modern marketing.

Who said that? Babe Ruth, a professional baseball player.

Who said that? Jim Rohn, an entrepreneur, author, and motivational speaker.

19. “You need to let the little things that would ordinarily bore you suddenly thrill you.”

Who said that? Andy Warhol, an artist, film director, and a leading figure in the visual art movement known as pop art.

If art serves as your biggest source of inspiration, check out these songs about calling.

20. “Refuse to attach a negative meaning to the word ‘no.’ View it as feedback. ‘No’ tells you to change your approach, create more value, or try again later.”

Who said that? Anthony Iannarino, an international speaker, bestselling author, and entrepreneur.

21. “To be seen as a credible and trusted advisor, every touch you have with a customer should provide added value.”

Who said that? Sharon Gillenwater, co-founder, and editor-in-chief at Boardroom Insiders.

22. “How you sell is more important than what you sell.”

Who said that? Abraham Lincoln, sixteenth president of the United States.

24. “Every email is an opportunity to test a different benefit or angle.”

Who said that? Heather R Morgan, founder, and CEO of SalesFolk.

Who said that? Brian Tracy, a motivational public speaker and self-development author.

26. “Sale is an outcome, not a goal. It’s a function of doing numerous things right, starting from the moment you target a potential prospect until you finalize the deal.”

Who said that? Jill Konrath, a sales strategist, speaker, and author.

Who said that? Pablo Picasso, one of the most influential artists of the 20th century and a co-founder of the Cubist movement.

Who said that? Nelson Mandela, an anti-apartheid revolutionary, statesman, and philanthropist who served as the first president of South Africa.

29. “Opportunities are usually disguised as hard work, so most people don’t recognize them.”

Who said that? Ann Landers, an advice columnist and a media celebrity.

Who said that? Henry Ford, an industrialist, business magnate, and founder of the Ford Motor Company.

31. “Filter everything you’re doing, saying, and pitching and you’ll improve just about every metric you care about today.”

Who said that? Matt Heinz, president of Heinz Marketing Inc.

32. “If you really look closely, most overnight successes took a long time.”

Who said that? Steve Jobs, an industrial designer and former CEO of Apple Inc.

33. “Today is always the most productive day of your week.”

Who said that? Mark Hunter, an author, speaker, and sales hunter.

Who said that? Sam Levenson, a writer, teacher, television host, and journalist.

35. “Great things are done by a series of small things done together.”

Who said that? Vincent van Gogh, a post-impressionist painter, and one of the most influential artists in Western art history.

36. “When reps take the role of a curious student rather than an informed expert, buyers are much more inclined to engage.”

Who said that? Jeff Hoffman, CEO and chairman of Global Entrepreneurship Network.

37. “It is not your customer’s job to remember you. It is your obligation and responsibility to make sure they don’t have the chance to forget you.”

Who said that? Yoda, from Star Wars.

We love this quote so much we also mentioned it in our list of best movies for salespeople to watch.

39. “There should be no boundaries to human endeavor. We are all different. However bad life may seem, there is always something you can do, and succeed at. While there’s life, there is hope.”

Who said that? Stephen Hawking, a theoretical physicist, cosmologist, and author.

40. “Salespeople move the economy of a nation. Someone could have invented the most amazing invention that is going to be a revolution for a planet, but that product goes nowhere unless someone sells it to someone else.”

Who said that? Michael Delaware, salesperson and author. 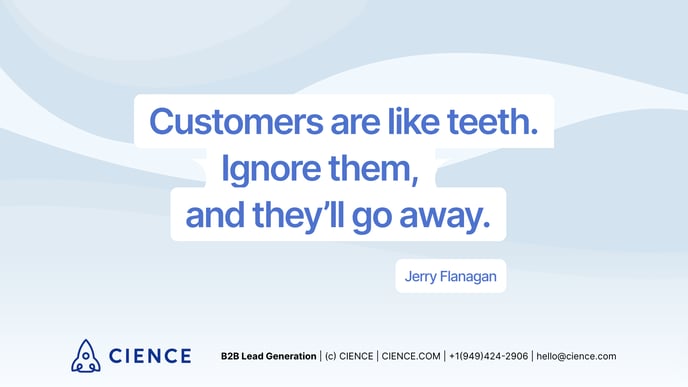 Who said that? Sheryl Sandberg, a business executive, billionaire, and philanthropist.

2. “I always wanted to be somebody, but now I realize I should have been more specific.”

Who said that? Lily Tomlin, an actress, comedian, writer, singer, and producer.

3. “I would say I outdid myself, but I’m always this good. So I simply did myself.”

Who said that? Tahani, The Good Place.

4. “I design, manufacture, distribute, and sell elevator buttons. I specialize in the fourth floor. And I don’t mean to brag, but I’m such a good salesman that I could sell one of my fourth-floor elevator buttons to the owner of a three-story building.”

Who said that? Jarod Kintz, an author.

Who said that? Dory, Finding Nemo.

Who said that? Ben Feldman, an actor and producer.

7. “Customers are like teeth. Ignore them, and they’ll go away.”

Who said that? Jerry Flanagan, an Army veteran and entrepreneur.

8. “If they don’t give you a seat at the table, bring a folding chair.”

Who said that? Shirley Chisholm, a politician, educator, and author.

Who said that? Dwight Schrute, The Office.

The Office supplied us with some unforgettable sales quotes but also made a significant input into the meme archives of CIENCE.

Who said that? Steve Martin, an actor, comedian, writer, producer, and musician.

Who said that? Jerry, Jerry Maguire.

Who said that? Phil, Modern Family.

Who said that? Billie Burke, a Broadway actress.

14. “If you think you are too small to make a difference, try sleeping with a mosquito.”

Who said that? Dalai Lama, a spiritual leader.

15. “People say nothing is impossible, but I do nothing every day.”

Who said that? Winnie the Pooh.

We hope this list of motivational and funny sales quotes made your day brighter. But before we go, we have another short story for you.

Two shoe salesmen go to a remote island to break into new markets. After a few days, one salesperson calls the office and says, “I’m on the next flight. Can’t sell shoes here. Everyone goes barefoot.” The other salesperson sends an email to the boss minutes later: “Get ready! The prospects are unlimited. Nobody wears shoes here!”

So remember: Prospects are unlimited, and you can achieve anything you want!

Closing the deal is much harder in today's market than it was just twenty years ago. We have too...
Read the article
Read full post: Cold Calling Scripts: How to Win More B2B Sales
Outbound Calls

The B2B SaaS market is booming, and it's no wonder the advantages are hard to ignore. From reduced...
Read the article
Book sales meeting
Thanks for your submission.