No matter how much you love what you do, we’ve all had days when it’s hard to keep your concentration and go on working. When the focus is gone, it just may be a sign that you need to recharge your batteries.

One of the ways to get your creative juices flowing is to connect with something that inspires you and channels that energy into your work.

We went through the archives and selected the best sales movies and movie quotes that will make you laugh, cry, and learn valuable lessons. Though not all these movies have salespeople in them, they will definitely make you more motivated to be the best version of yourself.

If you ever heard the “Show me the money!” phrase, then you’ve heard about this movie.

It is one of the most famous Tom Cruise roles and also one of the best sales-related movies. Jerry Maguire is a sports agent who decides to change his take on doing business, and his career changes once and for all. Though being eternally loyal to his clients, most of them leave him, except one. Jerry says that “the key to business is personal relations,” and it turns out it may just be the right statement to live by.

This Oscar-nominated drama portrays a salesman, Chris Gardner (Will Smith), who goes through some major financial setbacks that lead to homelessness. He is in the middle of a personal crisis as well, trying to raise his five-year-old (Jaden Smith). But don’t be overthrown by the word “drama.” He gets a chance to become a salesperson again, which may be his ticket to happiness.

Where to watch: Netflix, Prime Video.

There is no way you haven’t heard of “ABC.” Always be closing. It’s an ultimate sales movie to watch: Real estate salespeople are told that everyone will be fired by the end of the week, except for the two best closers. It heats the atmosphere, desperation, and rivalry between the main characters, embodied by a variety of Hollywood giants: Al Pacino, Alec Baldwin, Alan Arkin, and Ed Harris. It’s intense, so sales-oriented, and it’ll make you grateful for not working in an office like that.

Where to watch: Showtime, Hulu.

This romantic dramedy starts with Jamie Randall (Jake Gyllenhaal) losing his job and starting a new career as a pharmaceutical sales rep. We follow him bending some rules, not accepting “no” for an answer, and lifting the curtain of a medical world. If this doesn’t lure you in to watch this sales movie, maybe his intense romance with his love interest Maggie Murdock (Anne Hathaway) will.

Very few people are not familiar with the story of the corrupt broker Jordan Belfort, played by Leonardo Dicaprio, in this picture. “Sell me this pen” came right from there. It is a top sales movie: The performances are flawless, and it shows salespeople at their best and worst, highlighting that you have to sell the need, not the product.

A movie that goes sales meta by quoting Glengarry Glen Ross and Wall Street should definitely be on your watch list. In this room filled with high pressure (that’s why it’s called the boiler room), young SDRs (Giovanni Ribisi, Vin Diesel, Nia Long, Ben Affleck, etc.) are made millionaires overnight. And though being a crime drama brings some exaggeration to the table, it depicts well the training of the young sales reps accompanied by friendship and competition.

This is not a sales movie, yet, it will surely give you goosebumps, a feeling of gratitude, and hope. If a young schoolboy, William Kamkwamba (Maxwell Simba), manages to create a successful windmill prototype while striving to receive an education, save his family from hunger, and aid his village, you sure can find some motivation to enjoy your work and sell!

Where to watch: Netflix.

Queens’ car salesman Joey O'Brien (Robin Williams) has everything on the line at the moment: He has to sell twelve cars not to lose his job, repay his debt to the mafia not to lose his life, and find a way around two mistresses not to lose his mind. What’s more to say?

Where to watch: Prime Video, Netflix.

Being denied employment for many years, Bill Porter (William H. Macy), a man with cerebral palsy, get’s a chance to be a salesperson. Despite the inconveniences and pain that his condition provides, he walks eight to ten miles to meet his customers. Based on a real-life story, this sales movie won’t leave you indifferent.

This business comedy-drama movie is set before the big convention where three marketing reps are waiting for the arrival of the biggest client, the landing of whom will put their business right on track. The youngest rep gets to talk to the client, but instead of pitching the product, he picks something personal to talk about. Will it help, or will it ruin the possibility of landing a deal that big?

One thing you need to know about this movie—it has Eddie Murphy in it. The second thing—this movie is brilliantly hilarious.

It’s sort of like a “My Fair Lady” with a twist: Two bankers make a bet that if put in different conditions, even a homeless man can become a well-respected salesman and vice versa. This is a battle of street-smart and college-smart, and it won’t end the way you expect it to.

Joy Mangano (Jennifer Lawrence), an airline booking agent, struggles with her financial issues and her over-the-top family. Being frustrated with a mop she has to use every day, she invents a new one, a Miracle Mop. She faces many obstacles that could knock anyone down, but Joy moves forward and proves that nothing can stop you if you have a goal in mind.

Where to watch: Disney+, Prime Video.

It is a never-dying classic: A jury consisting of twelve men is in charge of a verdict on a teenage boy accused of murder. All but Juror 8 (Henry Fonda) consider him guilty, and the question is: Will the one convince all the others or the other way around? This movie will show you how critical listening can be if you want to see the truth.

A biographical drama on the 2008 mortgage crisis is a movie every sales professional should see. Besides being fascinating from a cinematography standpoint, Jared Vennett (Ryan Gosling) manages to turn sales pitching into poetry, and it’s something to aspire to.

It is not a sales movie from a traditional point of view. However, you might say it is when you see how Frank Abagnale (Leonardo DiCaprio) manages to sell himself. He has confidence, he dresses to impress, and gets whatever he wants. The only thing is that FBI agent Carl Hanratty (Tom Hanks) is chasing him all around. However, will he manage to catch him?

One day, Billy Beane (Brad Pitt), a baseball team manager, has a revelation—everything conventional about baseball is flawed. He gets an idea to reinvent his team with a tight budget in order to outsmart richer ball clubs. It’s a struggle, but everything’s possible with the help of big data analysis and Peter Brand (Jonah Hill), and that is what we have to remember about teamwork and planning strategically to win.

Where to watch: Netflix, Hulu.

This award-winning biopic shows you that challenges are what make us stronger. Erin Brockovich (Julia Roberts) is a single mother with three kids who struggles to make a living yet convinces a lawyer to give her a job. While working there, she finds evidence of water contamination by a huge company, and despite having no formal education, starts working on a case that changes hundreds of lives. It’s about the determination of one woman that we can all learn from.

How is it possible to stand by something at home and break those moral grounds at work? Nick Naylor (Aaron Eckhart) is a spokesperson of a tobacco company and lobbies heavily for cigarette use, despite wanting to be a role model for his twelve-year-old son. This satirical sales movie makes us wonder—is it worth selling your principles for the job?

A son embarks upon a journey to save the business of his late father, and though it may sound sweet and sentimental, this film is hilarious. During his attempts to sell, Tommy (Chris Farley) handles various objections, loses his pitch in front of a prospect, and gets in a vicious rivalry with his father’s assistant. It will take your mind off things and show you what not to do as a salesperson—and make you laugh out loud at the same time.

If you haven’t already watched this movie starring Tom Hanks as Forrest Gump, just do it. It’s filled with humanity and kindness, and it makes even the toughest salesperson shed a tear or two. It’s about things that matter the most: love, family, and friends. And though it includes a few sales moments throughout the movie, it’s more of a chicken-soup-for-the-soul kind of movie to get you inspired.

Where to watch: Netflix, Prime Video.

Those movies take some time to watch, so if you need something to inspire you right now, here are ten quotes from these and other flicks to do just that: 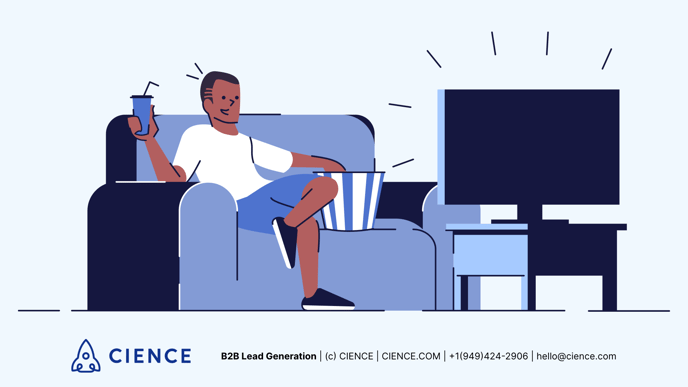 It’s a blessing if you love your job, but even then, we still sometimes need to let go and unwind. You can watch a movie, listen to some music, scroll through the Internet looking for memes, or spend some time with your family.

Whatever does it for you, it’s important to do it and take care of yourself so you can grow great, as Don Vito would say!

Your source for sales information
Read full post: SDR Outsourcing: Is It Right for My Business?
B2B Sales, Economy

SDR Outsourcing: Is It Right for My Business?

The year 2020 will forever be remembered for one thing in particular—the COVID-19 pandemic. It has...
Read the article
Read full post: The Bridge Group 2018 SDR Report’s Must-Know Takeaways for CEOs
B2B Sales

Lead generation is an essential activity for a company that intends to grow. This is why CEOs...
Read the article
Book sales meeting
Thanks for your submission.