"Next Monday at 10 a.m. works for me" is a line that makes the hearts of all sales development representatives (SDRs) burst with happiness. Then again, these types of answers are far from just a matter of luck or coincidence. A well-polished sales prospecting plan is key to accessing the most suitable targets at the perfect time and with the most optimal message.

Most sales reps will agree that B2B prospecting is no cakewalk. High-end decision-makers are constantly bombarded with unwanted cold calls, spammy email blasts, and other impersonal, poorly structured reach-out practices. For this reason, many hire assistants who care for their often saturated contact channels.

B2B sellers would even claim that getting a positive answer from a prospect is increasingly more complex as years go by, and they wouldn't be mistaken. A Gartner research study found that the typical enterprise buying group for a B2B solution involves six to ten decision-makers.

The B2B sales cycle length is also a matter to consider. Salesforce found that 13% of leads convert to opportunities and an average 84 days period, and only 6% of these opportunities convert to deals at the end of the follow-up campaign. Your mileage may vary, but we can all agree that sales cycles are not shortening as we move into a potentially recessionary environment

With these and more elements playing against the B2B sales teams, it becomes clear that targeting efforts must be on point from the beginning of every lead generation action. A sales prospecting action plan does just that: applies the most optimal filters to come up with solid target account lists (TALs) that hold the information of accurate possible buyers, also known as ideal customer profiles (ICPs).

In this article, we’ll take a closer view of the fabrics that shape the industry standard prospecting method with insights on leveraging probability to achieve the best possible results in every B2B lead generation campaign. 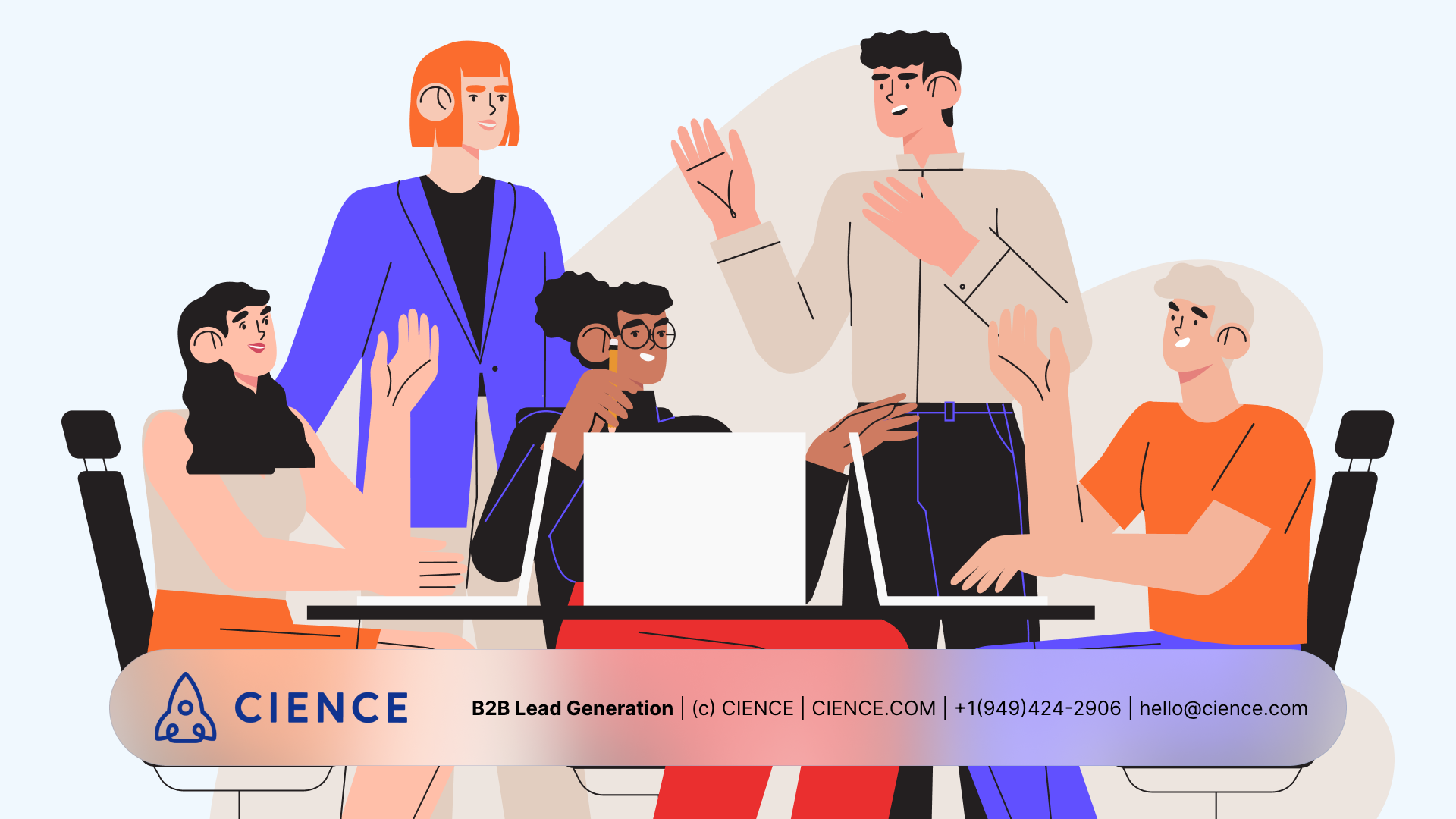 A mathematical definition of probability explains it as the extent to which an event is likely to occur, measured by the ratio of the favorable cases to the total number of possible scenarios. In the outbound lead generation business, the desired event translates to a golden appointment with a matching prospect. To achieve that outcome, B2B vendors must play the odds in their favor.

When a company is looking to outsource outbound services, it often expects to be provided with the highest volume possible of new sales opportunities. However, the lead generation strategy results are strictly correlated to what decisions were conjunctively taken by both parties: the client and the provider. 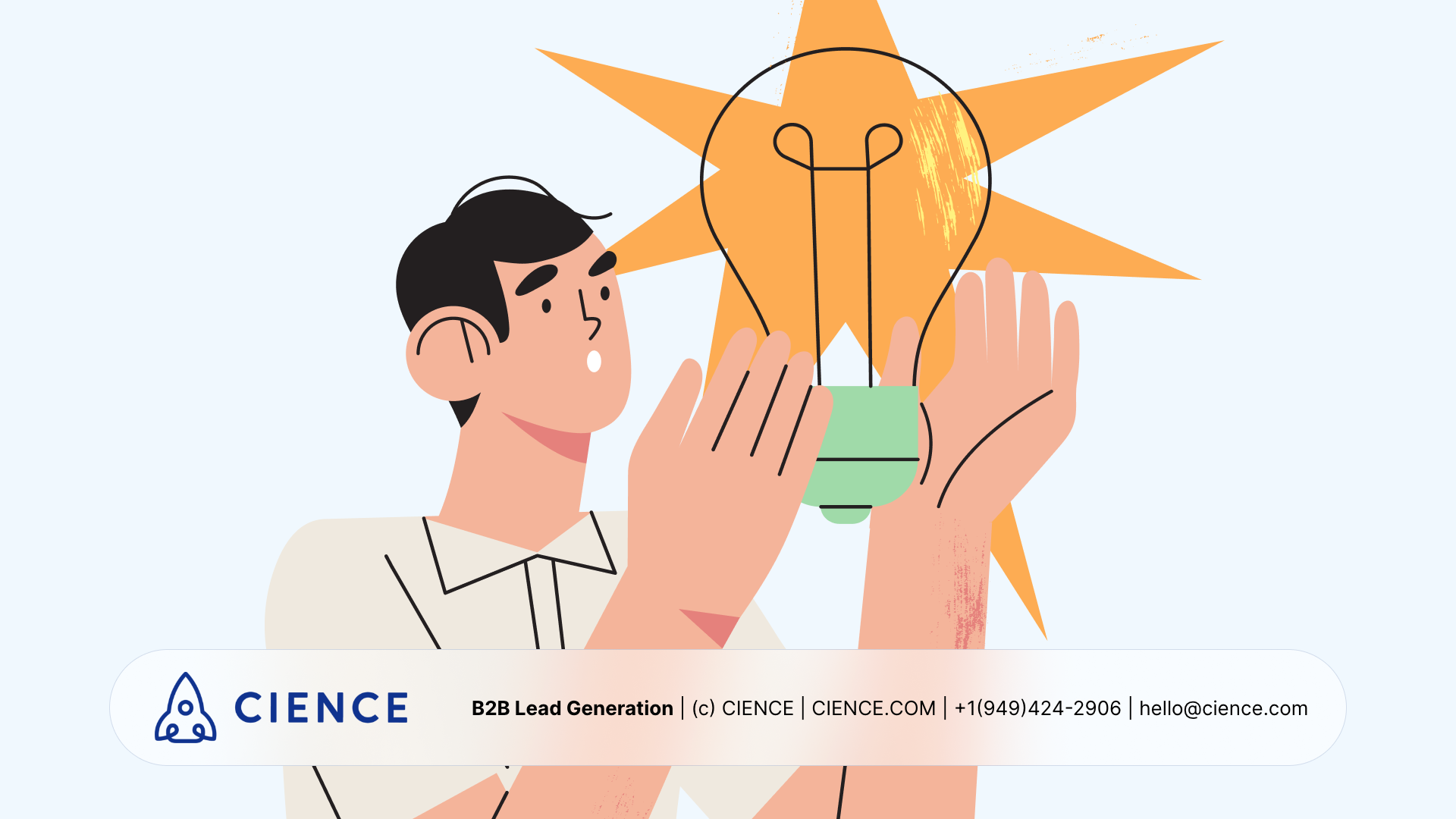 Every company in the world has a total addressable market (TAM), which can translate to the sum of all the available prospects in every country, industry, and hierarchy with enough budget to purchase their products. Both DMs and DIs blend inside the TAM stew at first, but it is imperative to separate them to decide where to bite first.

Then again, drafting a TAM is a critical step in the prospecting process, as it produces relevant questions that would lead to crucial answers for the success of the lead generation campaign, such as:

Sales executives (SEs) are fond of TAMs. For them, the bigger the universe, the more opportunities they have to land on a hot prospect and close a deal. However, a good data and outbound service provider knows better.

In the real world, you only have a couple of months to prove your worth to clients. For that reason, you should aim at the narrowest of the narrow, the bullseye inside the target, as you don't usually get second chances.

Once you have worked with clients to have the TAM ready, you can use it to design the lowest-hanging fruits: ideal customer profiles are the rocket fuel that ignites the B2B prospecting motor.

An ICP can be defined as a detailed file containing the description of a company that would be a perfect match for your product. Specific criteria like revenue, size, background, geography, industry, and technology usage are considered for their crafting.

Similar to buyer personas, which are accurate representations of the buying processes derived from real clients' data, ICPs are best used at the beginning of every lead gen activity. The richer they are, the better the probability of landing a meeting.

If a TAM converts into an ICP list without any changes, it means that no strategic decisions were made in shaping or pushing that universe of almost endless possibilities.

The essence of strategic prospecting is to accept that trade-offs are necessary to close new deals, as sales teams should prioritize the most favorable cases.

Let's say your TAM holds more than 35,000 companies at the moment, but you need to get a new client during your first month of prospecting. It would be virtually impossible (or highly exhausting) to dial 35K numbers in thirty days, so you decide to narrow that number down to 35 ICPs per day.

Which contacts do you try first? That's when prospecting filters come in handy. 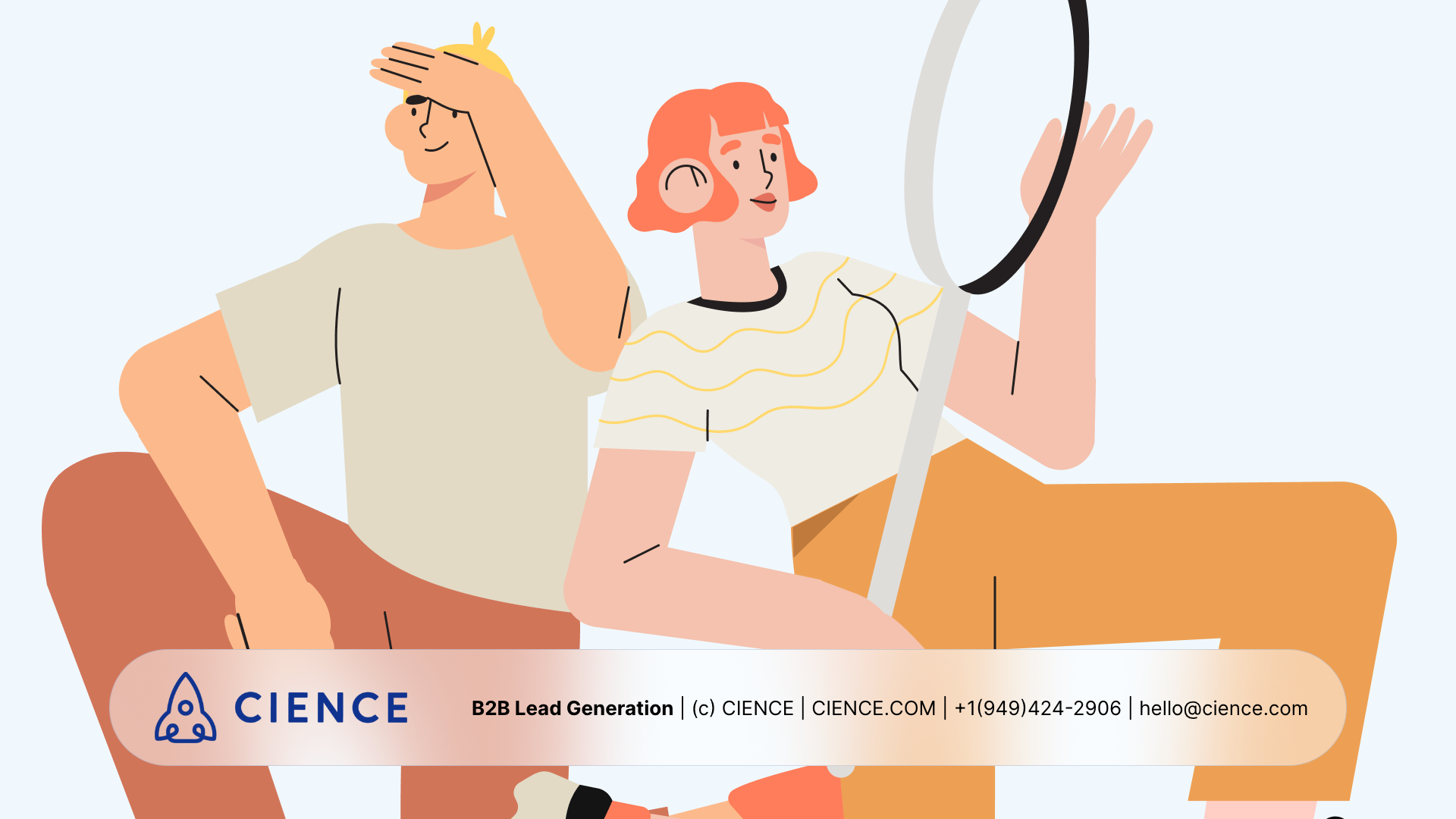 Even when your TAL is filled up with near-perfect ICPs, the risk of not being able to connect with your prospects is always present. Working a low-to-high risk is preferable in almost every case, as it allows sales teams to focus on the "easiest" conversions while leaving the most complicated leads to the very end.

Several probabilistic filters lower the risk of your outbound touchpoints. Here are the most representative ones:

Many B2B vendors follow their primal instincts and shoot for the most prominent brands possible, driven by the illusion that a couple of super profitable deals could lead the companies they represent to higher grounds in a short amount of time. And while closing this sort of deal is not impossible, it is just not very probable.

The bigger the company you want to do business with, the more obstacles you'll have to face to access DIs. This translates to more firewalls, email blocking software, gatekeepers, assistants, and (most importantly) budget, time, and energy waste from your team or your outsourcing partner.

Conversely, there are fewer guards at the gate for smaller companies. 99.9% of all American businesses are small companies. That means that over 32.5 million companies in the U.S. might have enough budget to purchase your product, yet their walls are less tall and more flexible. 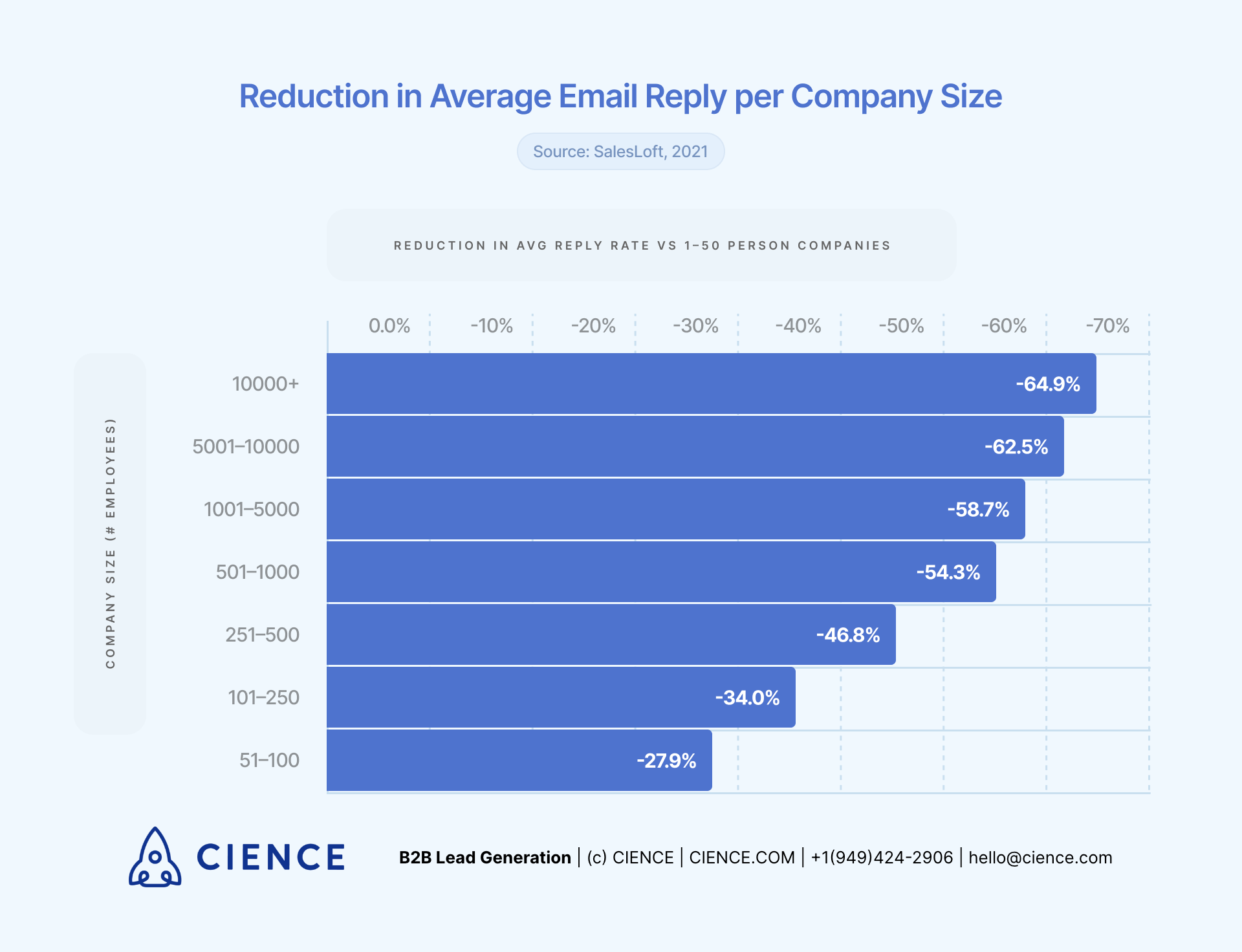 That saturation effect and the number of guardians at the gate can also be applied to the industry variable. The reasons specific industries are more secretive than others have a lot to do with the personality of the professionals found at the C-level. However, there are many other economic and traditional factors.

Certain industries are strengthened by contact with others, so their openness is much greater (technology and business services are good examples). However, others are able to nurture themselves and rely only on internal connections (healthcare is one of the most selective with its relationships).

Focusing your outbound efforts on the most open industries will significantly benefit the results of your prospecting process. 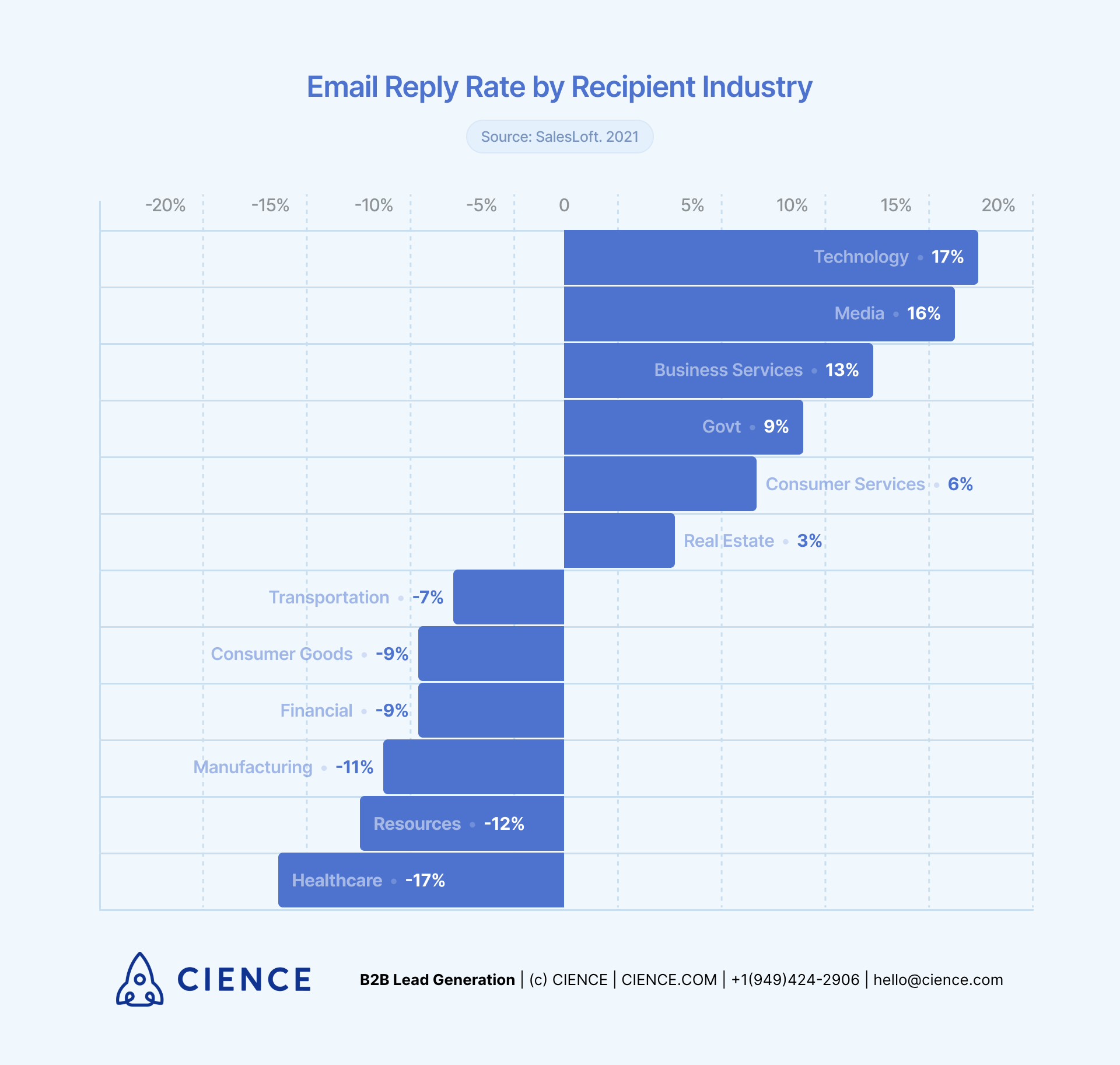 Finding which DIs belong to what departments inside an organization is also vital for success. There are specific roles within the same company that have a greater degree of openness with external contact. Likewise, some other positions and departments are much more complicated to access.

For instance, a sales representative would be a much easier target than an IT manager. While the first prospect is used to benefiting from outside relationships, the second might feel a greater degree of mistrust.

A decision-influencer from one department might share information with the DI from a different area, thus achieving a chain of touchpoints that could lead to a strong prospect. 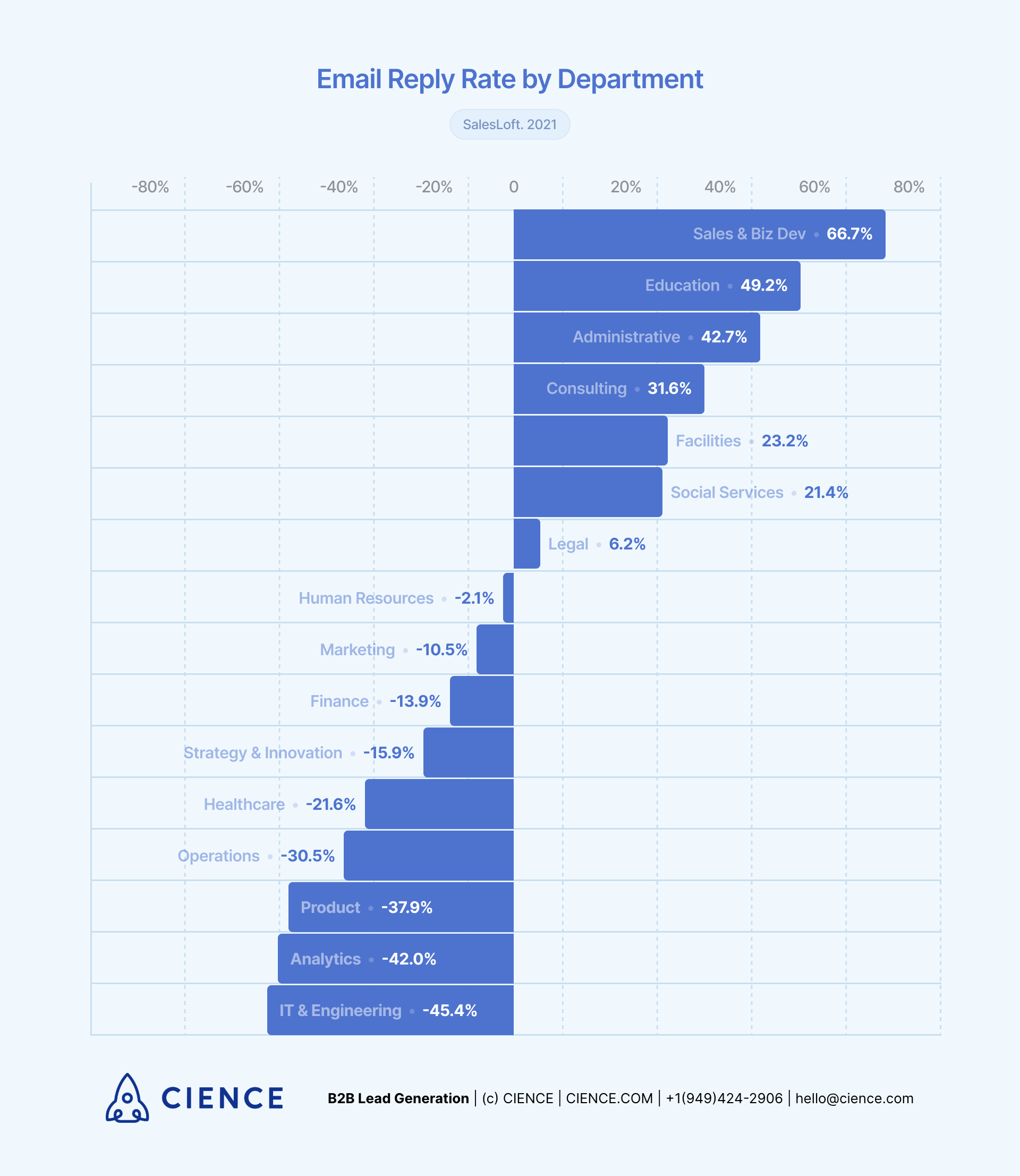 Another critical factor in the prospecting process is the geographical area in which your potential clients are located. Although the TAMs usually include important companies in several countries, the ICPs allow SDRs to select regions that tend to respond better to international prospecting strategies.

Again, this does not mean that options within the most saturated or exclusive regions are automatically ruled out. It is simply about considering this data when creating conversion metrics to be as accurate as possible. 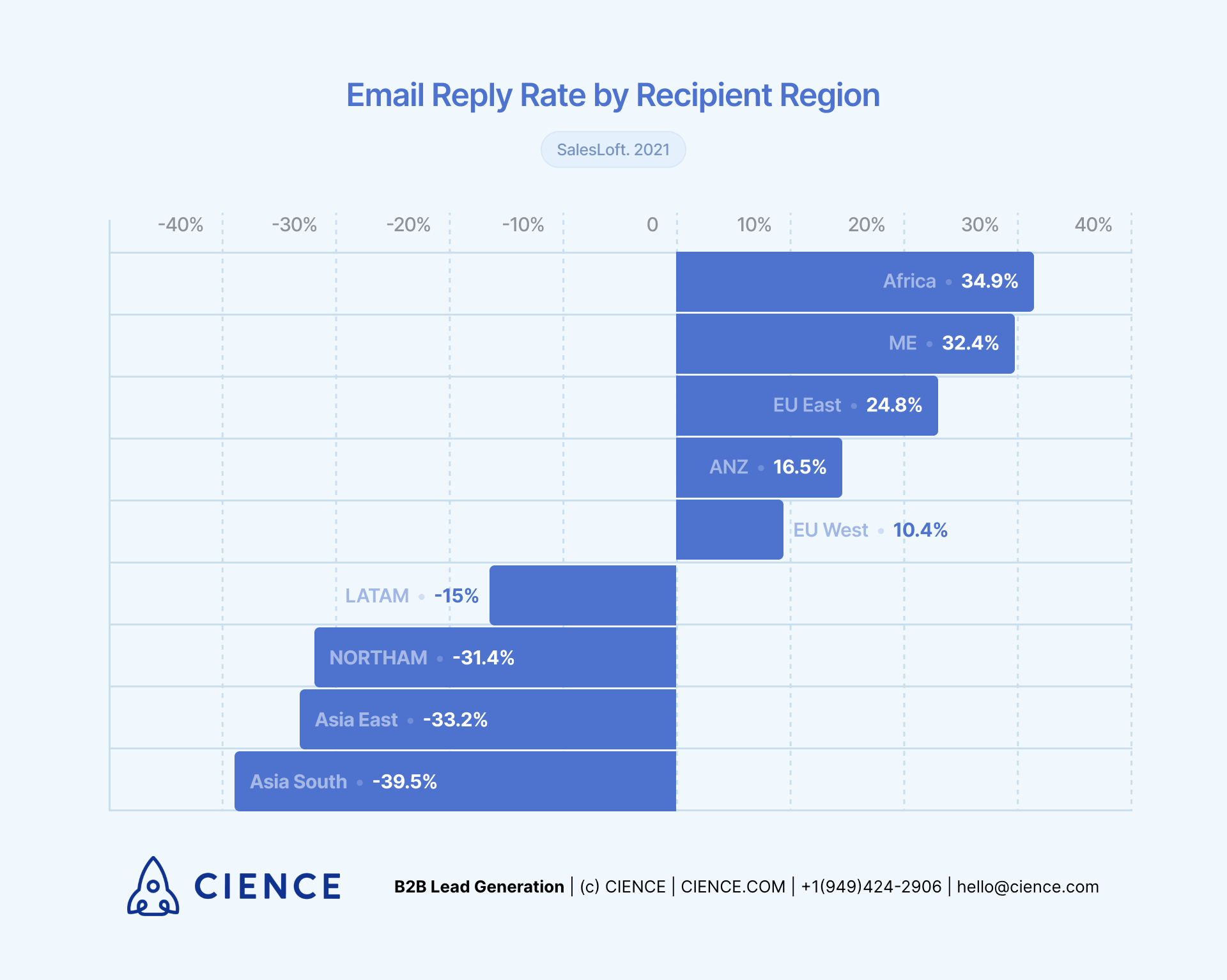 The hierarchy of the prospect records you hold directly impacts the response speed for meeting opportunities. The better the filtering skills of your sales reps, the easier it will be to separate the decision-makers (DM) from the decision-influencers (DI). The most important traits to differentiate these subjects are:

A C-level executive is responsible for the final stages of the sales process. They are not often involved in the research stage in the buyer's cycle. DMs have the final say in signing deals, but they won’t make a final decision without an expert's contribution.

A junior- or mid-level manager plays a more significant role in the buying process. The decision-influencer is responsible for the initial research on a product or service and will most likely be part of the user crew. DIs are the ones who present the data that shapes the DM's final call.

By leveraging both personas at the right time, it is possible for account-based marketing (ABM) campaigns to attract prospects more accurately. The closer your point of contact is to the C-level, the lower the chances of scheduling valuable meetings. 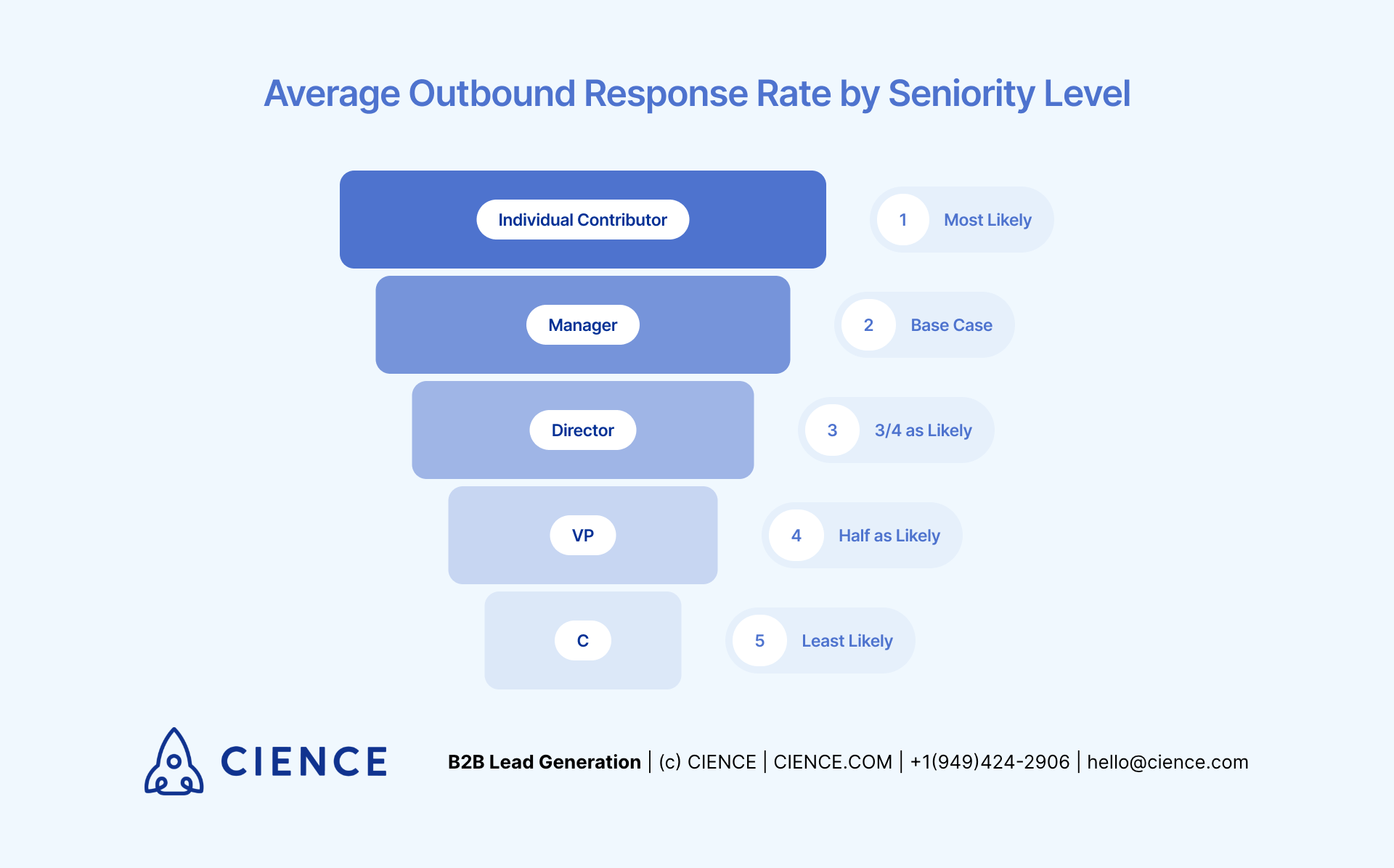 To put it into perspective, let’s look at a couple of strategic prospecting plan examples that better illustrate the weight of probability in outbound lead generation:

An SDR receives a prospect record on her desktop with characteristics such as:

The failure probability of landing a 1-on-1 video call with such a prospect is around 97.1% off the "average" cold outreach. Plus, this would result from a cold outreach effort so add an extra 3.5%. In other words, there is a 99.9% chance of failure to connect with this profile.

Right next to this prospect record, there is another ICP whose metrics can be summarized in the following points:

Quick math can reveal that this ICP has a 49% probability of success. The company is relatively small, the technology sector is ever-evolving, the LATAM region is more flexible, and the manager goes over his LinkedIn inbox almost daily. Victory is not assured, but the trail is much easier to walk.

Which option do you think the SDR will prefer? Which one would you choose? Exactly!

Landing meetings with B2B targeted accounts demands much practice and expertise. Every sales rep should keep in mind that building a successful sales prospecting plan is an ongoing process, as prospects also change their preferred touch channels when the tides change.

Always angle for the decision-influencers with the highest probabilities of success. If you want to know more about how our outbound prospecting strategies work in real life, reach us through our channels, and our team will be happy to help.

Your source for sales information
Read full post: 5 Tips on How to Start Prospecting
Prospecting

5 Tips on How to Start Prospecting

To some extent, it’s true that the more people you reach out to in prospecting, the more customers...
Read the article
Read full post: Cost per Lead Metrics Exposed: An Insider’s Look at Sales Development
Lead Generation, Economy

In the sales development department of most businesses, there is one number that dominates all...
Read the article
Read full post: 10 Best Ways to Increase B2B Sales
B2B Sales, Account-Based Marketing

Read the article
Book sales meeting
Thanks for your submission.